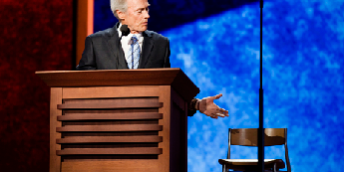 This past week will be remembered as the turning point in which Obama’s re-election possibilities took a severe beating and can possibly signal the beginning of the end of the Obama Presidency. All it took was for Clint Eastwood, the 82 year old actor and director to speak at the Republican National Convention to an empty chair. By addressing an “invisible” President Obama, Eastwood laid out what he sees as the good, the bad, and the ugly state of the man who occupies that empty chair in the White House. Eastwood continued and shared not only with the audience at the Republican National Convention but also with the wider American public watching at home, that he cried when Obama was elected and cried even harder four years later when millions were out of work; “It’s a national disgrace,” Eastwood said. “It may be time for someone else to come along and solve the problem.”

Jewish culture is keenly aware of the “empty chair syndrome” which is not a new concept in Judaism. During the Passover Seder we fill a cup for Elijah the Prophet and place the cup before an empty chair leaving the door open for him, in the hope that he arrive and lead us to salvation. During the Succot holiday we invite different Biblical icons into our Succot. Their lack of physical attendance serves as our motivation to analyze our lives in the hopes of living more righteously the rest of the year. Clint Eastwood, by invoking the concept of an “empty chair” in a political framework reminded us all of the need to seriously examine and reflect on the past four tough years weighted  down by  political battles largely lost; relationships frayed; allies abandoned and  promises broken. Americans will have to consider whether or not Obama is competent enough to lead America and the free world for another four years. Obama, with a mountain of evidence to the contrary notwithstanding, regards himself as a success over the past four years. Romney regards himself as a man who has a job to do.

The best line at the Republican National convention was spoken by Mitt Romney; “President Obama promised to slow the rise of the oceans and to heal the planet. My promise…is to help you and your family.” In one bold swoop we were able to differentiate between Obama’s cocky, irrelevant and unabated narcissism versus Romney’s instinctive modesty and ability to genuinely connect to Main St, USA. For many American’s, Obama’s total disregard of what the country wanted him to work on; that is to fix the economy preferring to pursue his own personal agenda, and Romney’s concentration on the ailing American economy and the impending fiscal crisis is really the choice that Americans will have to make; either go with the illusion, or deal with reality.

This  strategy of going with the illusion was adopted long ago by the Democratic party and responsible for most of their success over the last eighty years has played itself out, leaving Obama with very little to sell the public this time around. President Franklin Roosevelt, during the Great Depression, saw the value of buying votes by spreading benefits around.  It was a successful strategy refined by other Democrats over the years.  It was based on focusing on certain segments of the population and affiliated interest groups and winning them over with “gifts.” This was and is a strategy of winning elections rather than a strategy of governance, and it was therefore very successful in winning elections, but not so in governing the nation nor leading the free world. This 80 year old Democrat tradition is based on an assorted collection of interest groups with nothing in common other than “we want more,” making it impossible to have a coherent governing strategy. I think most would agree that Obama’s biggest failure as President has been exactly this, being unable to translate his governing strategy into concrete results. Today’s America has reached a point where there is no more money to buy votes and goodies will soon be taken away rather than distributed. As much as the Democratic Party aims to make dependency attractive and politically correct, they can no longer take from the productive sectors and give indiscriminately to the non-productive sectors hoping to retain political support and win an election. No one will pick up the bill, and we all know it.

Here in Israel, this past week has also been a watershed for those responsible for protecting the people of Israel.  We too can no longer go along with the illusion. During this past week, it has become clearer than ever that Israel will have to act alone against its existential threat, Iran. Almost every week we in Israel have heard from President Obama or from one of his many spokespersons that he is watching our back, even as his Administration tries to sell to the American public a make-believe world in which Iran’s nuclear intentions are potentially peaceful, sanctions are working and diplomacy hasn’t failed after three and half years. Well, we too have come to the conclusion that President Obama will not really live up to what he claims. Common sense tells you that if Obama believes that he will get the same results by doing nothing and doing something than he will always choose doing nothing. This is how we can best define the past four years, the empty chair has spoken, and it has nothing to say.

Ron Jager, a 25-year veteran of the Israel Defense Forces, serving as a field mental health officer.  Prior to retiring in 2005, served as the Commander of the Central Psychiatric Military Clinic for Reserve Soldiers at Tel-Hashomer. Since retiring from active duty, he has been providing consultancy services to NGO’s implementing Psycho trauma and Psycho education programs to communities throughout Israel. Today, Ron serves as the Strategic Advisor to the Shomron Liaison Office.        To contact:  medconf@netvision.net.il