Migron and the threat to Israeli democracy 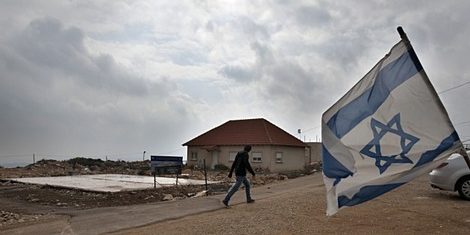 By Tuesday, 50 Israeli families will have been tossed out of their homes in their village of Migron, which is set for destruction.

They will not be dispossessed because they unlawfully squatted on someone else’s property.

These portrayals are reasonable on the narrow level of day to day developments in the story of Migron’s struggle. But on a more fundamental level, the story of Migron and its pending destruction is the story of the power struggle between Israel’s unelected, radical legal fraternity represented by the attorney-general, the State Prosecution he directs and the Supreme Court on the one hand, and Israel’s elected governments – from the Right and from the Left – on the other.

Migron is the latest casualty of this struggle. The legal fraternity’s bid to wrest sovereign power of governance from Israel’s elected leadership threatens our democracy. In its continuous assault on governing authority, the legal fraternity renders it difficult if not, as a practical matter, impossible, for the government – any government – to govern.

It is important at the outset to recognize that there is a world of difference between the rule of law and the rule of lawyers. The fate of Migron, which was sealed on Wednesday with the decision of the Supreme Court, sitting as the High Court of Justice, to remove all 50 families from their homes, is a legal atrocity.

Migron was founded in 1999 on 60 plots of land. In 2006, the EU-funded Peace Now petitioned the High Court claiming to represent Arab owners of five out of the 60 plots of land. Peace Now asked the court to require the state to explain why it hadn’t destroyed the town, which the group claimed was built on stolen land. Migron’s residents dispute this claim.

In responding to this petition, the State Attorney’s Office could have asked the court to allow the issue of ownership to be adjudicated by a lower court. Instead, the State Prosecution accepted as fact Peace Now’s unproven claim of private ownership of the land. And, after numerous delays, in 2011 the court ruled that the village must be destroyed.

Following its victory in the Supreme Court, Peace Now sued the state for damages for the alleged Arab landlords, claiming that the presence of the community prevented the land’s owners from harvesting nonexistent olive trees. Peace Now abruptly canceled its lawsuit when the court asked for proof of ownership.

For their part, Migron’s residents went through Jordanian land records and were able to find owners for only seven of the registered plots. And they managed to buy – at exorbitant cost – three of those plots. Recognizing that its claim that Migron was illegally built on private lands could no longer be justified, Peace Now changed its strategy. In the latest Supreme Court hearings, brought by Migron’s residents, Peace Now claimed that the reason all the Israelis need to be ejected from their homes, and all the homes need to be destroyed, is that the village was built without proper permits.

Rather than follow the law and represent that position to the court, Weinstein instructed attorney Osnat Mandel from the State Prosecution to inform the court he did not accept the government’s decision, and ask for a continuance in order to give him time to force the government to change its position.

Addressing the court, Mandel said, “The attorney- general believes that the ministerial committee’s position will raise legal difficulties. And since we’re requesting a continuance for undertaking the evacuation anyway , he requests to hold meetings with the elected leadership.”

On the face of it, Weinstein’s defiance of a legally binding government decision was unlawful. Certainly it would appear to be grounds for his immediate firing. But while shocking, Weinstein’s rank insubordination was not unique.

And it was embraced by the legal fraternity.

After Sasson finished her report, she joined the post-Zionist Meretz Party. In 2009 she ran unsuccessfully for Knesset.

Weinstein didn’t even wait for the Levy Commission to begin its work before he sent Netanyahu a letter informing him that the commission’s report would have no impact on his handling of issues related to Israel’s rights to the areas. And as his decision to ignore the legally constituted ministerial committee’s position on Migron made clear, Weinstein continues to behave as though he and his colleagues sit above Israel’s democratically elected representatives.

Many on the Right are urging Netanyahu to adopt the findings of the Levy Commission as official government policy. While such a move certainly can’t hurt, it is hard to see what difference it would make in practice. Weinstein has already pledged to defy the government. So even if the report is adopted, the government’s lawyers will refuse to defend its positions.

Weinstein is only able to behave as he does because he operates in an environment where the Supreme Court has usurped the power of Israel’s elected governments to determine state policy.

At the same time that then-Supreme Court president Aharon Barak declared that “everything is justiciable,” the court gutted the requirement for legal standing. It has worked hand in glove with radical groups like Peace Now to dictate government policy. Through this collaboration, the court – not the government – determines Israel’s policies on everything from Israel’s legal position in Judea and Samaria to environmental issues, to the nature of Israel’s penal system, to homosexual unions, to education policy, to permissible military tactics in wartime.

In this environment of judicial tyranny, Weinstein can freely undercut governmental authority, because he knows that so long as his breach of trust pushes government policy to the Left, the Supreme Court will support his unlawful actions.

Aside from Migron, the most striking example of the legal fraternity’s recent collaboration to undercut governmental authority was its torpedoing of the government’s February 2011 appointment of Maj.-Gen. Yoav Galant to serve as the IDF chief of staff. At the time, the court agreed to hear a petition submitted by the Green Movement demanding the cancellation of Galant’s appointment.

The Green Movement claimed Galant was unfit to lead the military because in the past he had committed an administrative infraction by wrongfully using state land adjacent to his homestead on Moshav Amikam. The Green Movement had no direct interest in Galant’s administrative infraction and therefore, if the Supreme Court followed even the lowest standards for standing, it should never have received a hearing.

Even with the forbearance of the court, the Green Movement’s ability to win the case was dubious at best. The Senior Appointments Committee had already vetted Galant’s candidacy, and approved it despite his misuse of state lands. But Weinstein had other plans.

Claiming he had “ethical difficulties” defending Galant’s lawful appointment, Weinstein refused to defend the government before the Supreme Court. Consequently, Weinstein compelled the government to force Galant to resign his commission and appoint someone else to serve as the IDF’s top commander.

But even if he does these things, all they would serve to do is temporarily mitigate the frustration of his voters. They wouldn’t change the basic calculus of power. The fact is that today Netanyahu lacks the means to curb the legal fraternity’s abuse of power.

The media staunchly defend every move the legal fraternity takes to usurp the powers of the government and the Knesset. Indeed, the media represents the legal brotherhood’s unlawful moves as supreme acts of selflessness on behalf of Israeli democracy and the rule of law.

Every potentially powerful critic of their behavior has found himself the subject of protracted criminal probes. This includes Netanyahu during his first term, Foreign Minister Avigdor Liberman for the past decade, former justice ministers Tzachi Hanegbi and Haim Ramon, and Justice Minister Yaakov Neeman during his first tenure in office.

The dispossessed residents of Migron are just the latest casualties of the legal fraternity’s campaign to force its radical agenda on an unwilling electorate. If we wish to save Israel’s democratic system, the people of this country must stand up and demand that our representatives protect our right to be governed by those whom we elect and not by self-appointed clerks.

The only suitable response to Migron is a legislative overhaul of Israel’s legal system.