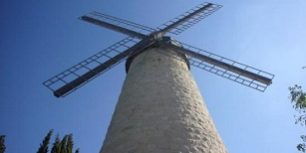 Israeli Prime Minister Benjamin Netanyahu on Tuesday stated that Zionism and the rebirth of the Jewish state would not have succeeded without the backing and support of Christian Zionism.

Netanyahu was speaking at a rededication ceremony for the landmark windmill situated at the entrance to Mishkenot Sha’ananim, the first neighborhood built outside Jerusalem’s Old City walls.

Built in 1858 by Jewish philanthropist Moses Montefiore, the windmill quickly became a recognized symbol of Jerusalem. But over the years, it fell into disrepair.

The windmill’s restoration was made possible by the cooperation of various government bodies and private charities, but the bulk of the funding has come from the Dutch organization Christians for Israel.

Last month, Dutch experts oversaw the installation of a new dome and blades on the iconic structure, and managed to return the windmill to working order.

Acknowledging the role played by Christians for Israel in this particular project, and the involvement in general of Christian Zionists in Israel’s restoration, Netanyahu said:

“I don’t believe that the Jewish State and Modern Zionism would have been possible without Christian Zionism. I think that the many Christian supporters of the rebirth of the Jewish State and the ingathering of the Jewish people in the 19th century made possible the rise of…modern Jewish Zionism. We always had the deeply ingrained desire to come back to our land and rebuild it. …That was made possible in the 19th century, by the resurgence of Christian Zionism… It’s well represented here today by our Dutch friends.”