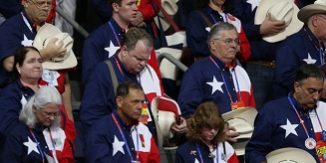 With all the speculation in recent weeks over whether Mitt Romney would tap a fellow Mormon to deliver a prayer at the Republican National Convention, one never would have guessed that the opening invocation would be delivered by a rabbi. But on Tuesday afternoon, when the convention makes its belated beginning after being postponed due to inclement weather, Rabbi Dr. Meir Soloveichik will be the clergyman kicking off the proceedings.

In June, he engaged in public dialogue about religion and politics at Yeshiva University with Newark’s Democratic Mayor Cory Booker, whom he called a “national hero.” In July, he interviewed for the position of Chief Rabbi of the United Kingdom and has since emerged as a frontrunner to replace retiring Rabbi Jonathan Sacks, despite his youth. Now, to cap this already remarkable summer, Soloveichik—whose day jobs include serving as associate rabbi at the prominent Modern Orthodox Manhattan synagogue Congregation Kehillath Jeshurun, teaching at the Ramaz School, and running the Straus Center for Torah and Western Thought at Yeshiva University—will open the GOP’s most important event of the year.

While Soloveichik’s advent upon one of politics’ most prestigious stages may seem sudden from afar, the rabbi’s appearance at the RNC is actually a culmination of many years of conservative advocacy—and no small amount of controversy. Though his last name evokes a rabbinic pedigree, it also denotes a tradition of political engagement. Soloveichik’s great-uncle and the father of Modern Orthodoxy in America, Rabbi Joseph B. Soloveitchik—the surname is spelled differently by different branches of the family—was a strident critic of communism, having experienced its oppression firsthand before immigrating to the United States. Soloveichik’s grandfather, Rabbi Ahron Soloveichik, was a formidable civil-rights advocate and a vehement opponent of the death penalty and the Vietnam war.

Their descendants have followed in their footsteps, if not always their personal politics. Meir’s younger sister, Nachama, serves as the press secretary for Republican Sen. Pat Toomey and co-authors his policy books. (Read senior writer Allison Hoffman’s profile of her here.)

Meir Soloveichik was already testing the waters of conservative politics himself more than a decade ago. In 2000, he participated in the annual March for Life in Washington, D.C., to protest Roe v. Wade and wrote about his experience in the Human Life Review in a piece titled “A Yarmulke at the March.” “I continue to dream of a day when my skullcap will not stick out so much,” Soloveichik wrote, “of … a sea of yarmulkes at the march: Jews and Christians united in defense of innocents.” In November 2006, Soloveichik defended torture (under a carefully defined set of circumstances) against Stephen Casey, a Christian theologian, and Aryeh Klapper, another Orthodox rabbi, at the Jesuit University of Scranton.

A prolific writer for conservative publications like Commentary and the Christian journal First Things, Solly—as he is known to friends and acquaintances—has consistently taken provocative positions on subjects as diverse as hate (sometimes a virtue; “in the Jewish religion”) and Jesus. In January 2012, he joined a group of prominent conservative bioethicists in an amicus brief opposing stem-cell research. A month later, Soloveichik testified before Congress against the Obama Administration’s mandate requiring Catholic employers to provide contraception coverage and co-authored a Wall Street Journal op-ed with prominent Christian leaders deeming the mandate an infringement on religious liberty. (His position on the matter evoked harsh criticism from other prominent members of the American Jewish community.)

But despite his staunch conservative views, Soloveichik does not present himself as a fiery ideologue. Instead, he is known for making his arguments affably, with a disarming sense of humor and wry self-awareness at the controversial nature of many of his stances. At his 2006 lecture on torture at the University of Scranton, where he was invited by noted Judaic Studies scholar Marc Shapiro, he opened by observing: “Professor Shapiro seems to only bring me in for specific subjects—he had me first here in the religious department to defend hate, and now he has me here to defend torture. Next time, cannibalism, I think.” He revels in being contrarian, as he explained in that lecture: “I do work a lot on arguing that things which people assume are always wrong are not necessarily so and indeed can often be right.”

Solly is also known to be a consummate movie buff, and he weaves popular culture references effortlessly into his synagogue sermons and scholarly presentations. One acquaintance recalls driving with Soloveichik from Boston to New York, expecting to discuss serious topics of Jewish law and instead talking movies for four hours straight. His sister says he’s a big fan of Harry Potter. In one of the few traits he does share with other rabbis, Soloveichik has a demonstrated weakness for puns. One of his bioethics lectures is titled “The Man With Levi’s Genes.” And at the congressional hearing on the Obama Administration’s contraception mandate, after Bishop William Lori likened the law to requiring a kosher deli to serve ham, Soloveichik brought down the house by quipping to Chairman Darrell Issa, “You know, I’m also concerned about the pork being produced here in Washington.”

Indeed, one reason Soloveichik seems to have proven such an able political advocate and coalition-builder is that his political conservatism is often coupled with a personal and religious liberalism and openness. At a time when American Modern Orthodoxy has grown more insular, his Straus Center at Yeshiva University—with its mission to “develop Jewish thinkers and wisdom-seeking Jews by deepening their education in the best of the Jewish tradition by exposing them to the richness of human knowledge and insight from across the ages”— acts as a counterbalance to more conservative trends within the community. Under its auspices, Soloveichik has brought a variety of Jewish and non-Jewish thinkers and public servants, like Mayor Booker, to the university. In his writing, Soloveichik himself has advocated for greater interfaith engagement on the part of the Orthodox community in matters of collective social and political welfare.

Whether Soloveichik continues this work at Yeshiva University, takes up the post of Britain’s chief rabbi, or further cultivates his persona as a conservative public intellectual, one thing is certain: As this unusual rabbi ascends from the synagogue lectern to the podium of the Republican National Convention, the Jewish community and world at large are witnessing a harbinger of things to come.