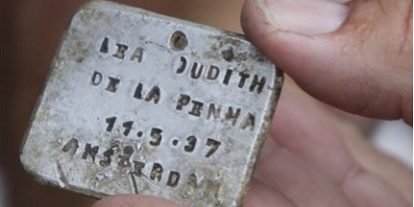 By  AP and ISRAEL HAYOM—

When Israeli archaeologist Yoram Haimi decided to investigate his family’s unknown Holocaust history, he turned to the skill he knew best: He began to dig.

After learning that two of his uncles were murdered in the infamous Sobibor death camp, he embarked on a landmark excavation project that is shining new light on the workings of one of the most notorious Nazi killing machines, including pinpointing the location of the gas chambers where hundreds of thousands were killed.

Sobibor, in eastern Poland, marks perhaps the most vivid example of the “Final Solution,” the Nazi plot to wipe out European Jewry. Unlike other camps that had, at least, a facade of being prison or labor camps, Sobibor and the neighboring camps of Belzec and Treblinka were designed specifically for exterminating Jews. Victims were transported there in cattle cars and gassed to death almost immediately.

But researching Sobibor has been difficult. After an October 1943 uprising at the camp, the Nazis shut it down and leveled it to the ground, replanting over it to cover their tracks.

Today, tall trees cover most of the former camp grounds. Because there were so few survivors — only 64 were known — there has never been an authentic layout of the camp, where the Nazis are believed to have murdered some 250,000 Jews over an 18-month period. From those few survivors’ memories and partial German documentation, researchers only had a limited understanding of how the camp operated.

“I feel like I am an investigator in a criminal forensic laboratory,” Haimi, 51, said near his home in southern Israel this week, a day before departing for another dig in Poland. “After all, it is a murder scene.”

Over five years of excavations, Haimi has been able to remap the camp and has unearthed thousands of items. He hasn’t found anything about his family, but amid the teeth, bone shards and ashes through which he has sifted, he has recovered jewelry, keys and coins that have helped to identify some of Sobibor’s formerly nameless victims.

The heavy concentration of ashes has led him to estimate that far more than 250,000 Jews were actually killed at Sobibor.

“Because of the lack of information about Sobibor, every little piece of information is significant,” said Haimi. “No one knew where the gas chambers were. The Germans didn’t want anyone to find out what was there. But thanks to what we have done, they didn’t succeed.”

The most touching find thus far, he said, has been an engraved metal identification tag bearing the name of Lea Judith de la Penha, a 6-year-old Jewish girl from Holland who Israel’s Yad Vashem Holocaust memorial confirmed was murdered at the camp.

Haimi calls her the “symbol of Sobibor.”

“The Germans didn’t discriminate. They killed little girls too,” he said. “This thing has been waiting for 70 years for someone to find it.”

Haimi’s digs, backed by Yad Vashem, could serve as a template for future scholarship into the Holocaust, in which the Nazis and their collaborators killed about 6 million Jews.

“I think the use of archaeology offers the possibility of giving us information that we didn’t have before,” Deborah Lipstadt, a prominent American Holocaust historian from Emory University, said. “It gives us another perspective when we are at the stage when we have very few people who can speak in the first person singular.”

She said that if the archaeological evidence points to a higher death toll at Sobibor than previously thought, “it is not out of sync with other research that has been done.”

Haimi’s basic method is similar to what he does at home, where he does digs for Israel’s Antiquities Authority in the south of the country — cutting out squares of land and sifting the earth through a filter. Because of the difficult conditions at Sobibor and the sensitive nature of the effort, he is also relying on more non-invasive, high-tech aids such as ground-penetrating radar and global positioning satellite imaging.

Based on debris collected and patterns in the soil, he has been able to figure out where the Nazis placed poles to hold up the camp’s barbed wire fences.

That led him to his major breakthrough — the mapping of what the Germans called the Himmelfahrsstrasse, or the “Road to Heaven,” a path upon which the inmates were marched naked into the gas chambers. He determined its route by the poles that marked the path. From that, he determined where the gas chambers would have been located.

He also discovered that another encampment was not located where originally thought and uncovered an internal train route within Sobibor. He dug up mounds of bullets at killing sites, utensils from where he believes the camp kitchen was located and a swastika insignia of a Nazi officer.

Along the way, he and his Polish partner Wojciech Mazurek, along with some 20 laborers, have stumbled on thousands of personal items belonging to the victims: eye glasses, perfume bottles, dentures, rings, watches, a child’s Mickey Mouse pin, a diamond-studded gold chain, a pair of gold earrings inscribed ER — apparently the owner’s initials — a silver medallion engraved with the name “Hanna.”

He also uncovered a unique version of the yellow star Jews were forced to wear by the Nazis, made out of metal instead of cloth, which researchers determined to have originated in Slovakia.

Marek Bem, a former director of the museum at Sobibor, said the first excavations began at the site in 2001, with several stages before he invited Haimi to join in 2007. He said the mapping of the 200-meter (yard) long Himmelfahrsstrasse opens the door to look for the actual gas chambers.

“We are nearer the truth,” he said. “It tells us where to look for the gas chambers.”

Haimi is not allowed to take any of the items out of Poland, but he consults regularly with Yad Vashem’s International Institute for Holocaust Research, which helps him interpret his findings and gives them historical perspective.

Dan Michman, head of the institute, said Haimi’s research helps shed light on the “technical aspects” of the Holocaust. It also grants insight, for example, on what people chose to take with them in their final moments.

“His details are exact and that is an important tool against Holocaust denial. It’s not memories, it’s based on facts. It’s hard evidence,” he said.

But the accurate layout is Haimi’s greatest contribution, allowing researchers to learn more about how it functioned, said Deborah Dwork, director of the Strassler Family Center for Holocaust and Genocide Studies at Clark University in Worcester, Mass.

She said some critics have suggested that the sites of former death camps are “sacred” and “should remain untouched.” But she said she believes the excavation is justified. “I feel that our need for knowledge outweighs those concerns.”

Once his work in Sobibor is done, Haimi hopes to move on to research at Treblinka and other destroyed death camps.

Though archaeology is usually identified with the study of ancient history, Haimi thinks that with survivors rapidly dying it could soon become a key element in understanding the Holocaust.

“This is the future research tool of the Holocaust,” he said.