What happened in Egypt? 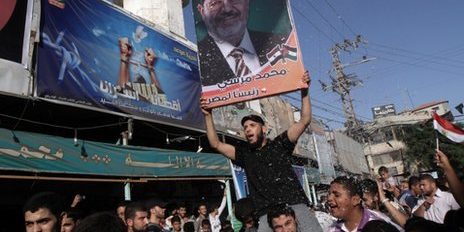 A short history of democracy in Egypt.

In February 2011 the Mubarak regime fell. There was going to be a parliament elected in Egypt. The parliament was elected. Its election was invalidated. Today there is no parliament in Egypt.

And they and the Salafists elected 70 percent of the parliament. But now there is no parliament.

The parliament was going to pick a constituent assembly to write a Constitution.

But now there is no Constitution. There are no restrictions on presidential powers.

And then there was a Supreme Council of the Armed Forces, but that was supposed to restrain the Muslim Brotherhood president.

And it was supposed to be restrained by the Egypt-Israel peace treaty and by the hope of getting US military aid. But the president got rid of it and fired the two top people and put in his own generals. And there is no restraint.

And we were told that the Egyptian government had promised to adhere to the Egypt-Israel peace treaty. But when it wished the regime simply violated the treaty and sent forces into the eastern Sinai. And it announced an alliance with Hamas, which openly declared its desire to go to war with Israel and destroy it. And Cairo did not demur.

THE EGYPTIAN regime did more economic damage to Israel by violating its contract on natural gas shipments than any other Arab regime in the history of the country, because Israel had to spend billions of dollars replacing that lost fuel. That is why Israeli taxes are going up and social spending must decline. The US government did not lift a finger to help.

The entire Israeli strategic plan has had to be altered to add an entire new defensive front along the border with Egypt. New units will be organized; new fences built; new equipment ordered and paid for.

Said Eddin Ibrahim, arguably the Arab world’s leading sociologist and certainly the leading advocate of liberal-Islamist alliance against the old Arab military regimes has now totally changed sides, warning that the Islamists want to hijack power and establish dictatorships. He pleads for Westerners to wake up.

Egyptian President Mohamed Mursi has now named the heads of the main Egyptian newspapers, radio stations and television networks. They include sleazeballs that sold out to the Mubarak regime and will do whatever he tells them. The first round-ups have begun of reporters who are to bold and honest in their investigations. The walls are closing in.

Soon the generals will be replaced; soon the judges will be replaced, and so too will the diplomats. In other words, the internal and external bureaucracy of Egypt’s government will become transformed. The old national security considerations will change.

The next stop is the court system, where plans are being made already to eliminate judges. True, there were many corrupt jurists, but there was no institution in Egypt where there were more courageous individuals and advocates of democracy. But that’s the problem.

The very integrity that made these men stand up against Mubarak will make them do the same against the Brotherhood – and they will not enforce sharia law. Their vote against the parliamentary result was a warning.

They will soon be ousted.

An upcoming conference of pro-Islamist judges will recommend massive retirements; the new constitution, written by Islamists, will weaken the courts against sharia as interpreted by Islamic clerics. The Brotherhood will take over al-Azhar University and appoint one of its men as chief qadi, Muslim judicial official. They will get into control of the wealthy religious endowments.

The writer is director of the Global Research in International Affairs (GLORIA) Center.