'Diplomacy with Iran has failed; it's time for important decisions 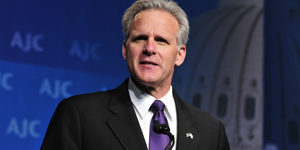 Responding to remarks by U.S. officials that an Israeli attack would only delay Iran’s procurement of nuclear weapons, Israeli Ambassador to the U.S. Michael Oren says “one, two, three, four years are a long time in the Middle East”

Israel would be willing to strike Iran’s nuclear facilities, even if doing so only delayed its ability to produce nuclear weapons for a few years, Israeli Ambassador to Washington Michael Oren said Wednesday.

Oren’s comments to a Bloomberg Government breakfast in Washington followed statements earlier this week by high-ranking U.S. officials who insisted that an Israeli attack would, at most, be capable of delaying Iran’s nuclear program rather than stopping it altogether.

Oren insisted that a delay in Iran’s nuclear endeavor would be a positive outcome: “one, two, three, four years are a long time in the Middle East — look what has happened in the last year” in terms of political change. “In our neighborhood,” he added, “those are the rules of the game.”

As talk of an attack on Iran’s nuclear facilities tops every Israeli agenda, and with many experts saying that it is critical to debilitate Iran’s nuclear program before it reaches a point where it would be difficult to have any impact, American has repeatedly called on Israel to give diplomatic efforts and sanctions a chance to take effect. But Oren commented Wednesday, “Diplomacy hasn’t succeeded. We’ve come to a very critical juncture where important decisions do have to be made,” he said.

Asked about U.S. assessments that an Israeli attack would delay Iran’s nuclear program for no more than two or three years, Oren pointed to Israel’s 1981 bombing of the Iraqi reactor, commenting, “I’m not saying we agree or disagree. What I am saying is that — on the basis of our previous experience — is not an argument against … in the past, we have operated on the assumption that we can only gain a delay.” The military assumption in 1981 was “we would gain a delay of between one and two years on that program. To this day, Iraq does not have a nuclear weapon,” Oren said.

The Israeli ambassador insisted that Israel would be thrilled if the situation could be resolved peacefully: “No country has a greater stake in resolving this diplomatically” than Israel, Oren said, but added that the Iranians are showing no flexibility in the talks with the West over its nuclear program.

Oren reiterated that Iran’s nuclear program is “progressing apace.” “An Iranian nuclear weapon is an existential threat to Israel,” he warned. “We don’t just say it. They say it as well. They confirm it.”

In an interview with Washington, D.C. area news radio station WTOP on Tuesday, Oren explained that an attack plan was on the table, but “we’re not there yet.”

Oren deflected the suggestion the U.S. could green-light an attack. “We are in close consultation and cooperation with the United States and understand that we are a sovereign state. And President Obama has said he recognizes that sovereign states not only have the right and the duty to defend their citizens,” Oren told WTOP.

Poll: Israel should not attack Iran without full U.S. cooperation

Most Jewish Israelis, a total of 61 percent, don’t think Israel should attack Iran without full U.S. cooperation, according to a poll conducted by the Israel Democracy Institute and Tel Aviv University released on Thursday.

The monthly tracking poll on Israeli attitudes found further that 57% of Israelis believe that recent remarks by Prime Minister Benjamin Netanyahu and Defense Minister Ehud Barak, insisting that a pre-emptive attack on Iran’s nuclear facilities is an existential necessity, are merely a tactic designed to pressure the U.S. to take more resolute action against Iran.

Only around a fifth of Israelis (22%) believe that Israel can rely on the promise made by U.S. Defense Secretary Leon Panetta, who vowed to prevent Iran from gaining nuclear capability.

As the American elections approach, twice as many Israelis believe that Mitt Romney assigns more importance to Israel’s national interests than Barack Obama: 40% of the respondents put more trust in the Republican candidate than in the president, while just 19% trust in Obama more. (The rest have no definite opinion on the matter.)