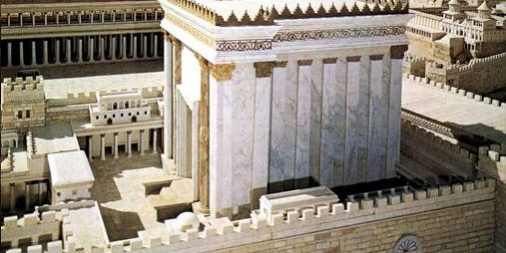 Temple Mount Teaching on the End of the Age

Luke 21:6, “As for these things which you see, the days will come in which not one stone shall be left upon another that shall not be thrown down.”

It has had many names over the years—Mount Moriah, the threshing floor of Araunah, Mount Zion and the Temple Mount.  Jews, Christians and Muslims all honor the site.  Abraham, the father of the Jews, once led his son Isaac to the crest of this hill to worship (Genesis 22:5), and the Jews would later worship there as a sovereign nation under David who purchased the site from a Jebusite farmer.

During the time of Jesus a magnificent Jewish temple dominated the hill and dazzled worshippers with its beauty, leading even one of the disciples of Jesus to marvel in Mark 13:1, “Teacher, see what manner of stones and what buildings are here!”  Forty-six years earlier Herod the Great began an ambitious temple construction project to curry favor with his Jewish subjects, a project which passed to his descendents and which took approximately eighty years to complete from start to finish.  Needless to say the temple sanctuary with its lavishly adorned courts, balconies, colonnades and porches easily overwhelmed the disciples’ senses.  The late afternoon sun poured over the Mount of Olives from the east splashing in the gold trimmings and donated decorations of the temple.  Its large, white, polished stones, some weighing tons, looked invincible, testifying of the power of God and making the words of Jesus all the more shocking when he responded to his disciple’s remarks with these words, “Do you see these great buildings?  Not one stone shall be left upon another that shall not be thrown down” (13:2).

Like leveling Mount Rushmore or filling in the Grand Canyon, nothing could have been more unimaginable to the disciples.  Yet less than forty years later the Roman General Titus marched into Judea, encircled, besieged and ransacked Jerusalem during the First Jewish Revolt and watched as his men torched the temple buildings.  After allowing time for the smoldering ruins to cool the soldiers returned with surviving residents of the city who with a Roman spear at their backs ripped every stone apart to mine for their new conquerors the gold that had melted during the blaze and had settled into the cracks of the walls and the foundation.  Although impossible to imagine, Jesus’ prediction proved true—not one stone was left upon another following a crazed rush to acquire the temple gold. In Jerusalem an Islamic mosque now stands proudly on the former site of Herod’s Temple.  Olive trees in a garden just to the east of the mosque give shade to stray cats that forage scraps from the tourists while the heat still pours down upon worshippers and visitors atop the Temple Mount.  But one day soon the “Sun of Righteousness” (Malachi 4:2)—Jesus Christ—will return to this site where once he correctly predicted the temple’s destruction.  Standing there today pilgrims should turn toward the rising sun and imagine Jesus’ return to establish his kingdom—a kingdom not about beautiful buildings, whether Jewish or Muslim, but a kingdom about a matchlessly beautiful Savior who alone deserves our adoration and worship. Come, Lord Jesus, come!