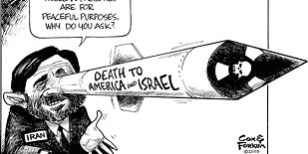 Prime Minister Binyamin Netanyahu is totally correct that sanctions will not stop Iran’s drive for nuclear capability, and Israel would not have to advise the United States of any plans to attack Iran, former Secretary of Defense Donald Rumsfeld told Fox News.

“I think the prime minister of Israel, Netanyahu, is probably correct. Their intelligence on Iran is excellent. Sanctions tend not to work very well over a long period of time, and they do have the effect, tending to damage and hurt the people, as opposed to the governments,” said the former Cabinet officer in the Bush administration.

“I think any prime minister of Israel who gets up every morning and reads in the newspaper that the leadership of Iran says that the Israeli state should be annihilated, eradicated, incinerated, has to know that it’s that prime minister’s responsibility to see that that doesn’t happen,” he added.

Rumsfeld agreed that Israel probably cannot knock out Iran’s nuclear sites, but he backed the theory that “all the Israelis need to do is delay them. They don’t need to …. I think a delay is — works to Israel’s advantage. I have no idea what Israel’s going to do.”

“I think that we should be providing that kind of covert assistance. And I think we should be trying to figure out who they are.”