Jewish Home MK calls for a Third Temple in Jerusalem 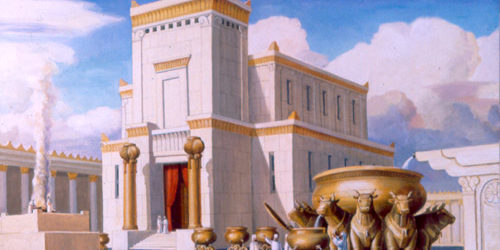 By ILAN BEN ZION, THE TIMES OF ISRAEL —

MK Zevulun Orlev of the Jewish Home party has called for massive reforms, including new Basic Laws, in order to establish a Third Temple in Jerusalem.

In an article (PDF) published in advance of the fast of Tisha B’Av in the weekly Hebrew journal Olam Katan, entitled “Internal and Legislative Reform,” Orlev wrote that the Temple must be rebuilt in Jerusalem and that “fundamental changes” to Israeli society and government were necessary in order to realize the success of the project.

Besides spiritual reform and the creation of a cadre of religious experts capable of running the Temple, Orlev argued that the government — “assuming the government will choose to be democratic” — must turn back dissent surrounding the project.

“It will be necessary to defeat no-confidence motions, to overcome the hostile, left-wing, secular media, and to ignore eye-rolling economists who will say it’s a waste of public funds,” he wrote.

To forestall appeals to the High Court of Justice, Orlev advocated the legislation of a new Basic Law that would guarantee funding and manpower and protect the Third Temple from prosecution.

“The law will also protect the project from accusations of discrimination, inequality of women in the Temple service, and animal cruelty in the offering of sacrifices,” Orlev continued.

Orlev acknowledged that to remove the ”religious and political impediment” to his plan, namely the presence of the al-Aqsa Mosque and Dome of the Rock atop the Temple Mount,  would mean that the “billion-strong Muslim world would surely launch a world war.” However, he added, “everything political is temporary and there is no stability,” and ”Of late we’re witnessed dramatic political changed that have occurred in many Arab countries.”

Orlev recently advocated a bill to bypass the High Court of Justice and protect illegally constructed buildings in the Beit El neighborhood of Givat Ulpana that was struck down by the Knesset in June.

Palestinians threaten violence over Jewish ‘provocations’ on Temple Mount
April 13, 2022
The Rapture in The Old Testament
June 2, 2021
Is Palestinian incitement driving the tensions in Jerusalem?
May 11, 2021
Ramadan Violence Raging All Over Israel But Focused On Jerusalem
May 10, 2021
Jerusalem Day clashes continue amid celebrations, hundreds of rioters injured
May 10, 2021
The Mystery of Babylon
May 3, 2021