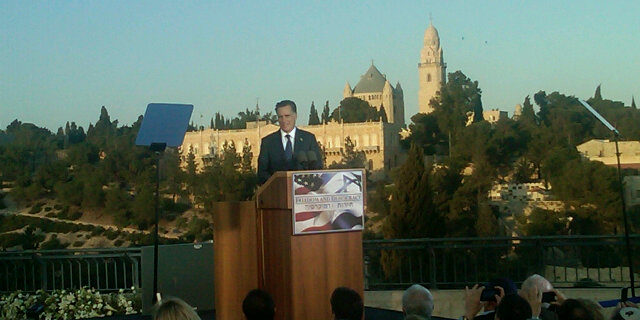 Today, Mitt Romney drew a clear contrast between himself and the Obama administration on the State of Israel. Standing before a backdrop of Jerusalem’s Old City on Judaism’s Ninth of Av – the day designated for mourning the destruction of the First and Second Temples – Romney didn’t flinch from embracing Jerusalem as Israel’s capital, even as the Obama administration continued to refuse even that simple statement.

“It is a deeply moving experience to be in Jerusalem, the capital of Israel,” said Romney.

Romney is not Obama on Israel. He doesn’t believe Israel was based on the Holocaust alone. He doesn’t think that Israel’s status as a moral force in the Middle East is in question. He doesn’t think Israel ought to be forced into concessions to terrorists:

To step foot into Israel is to step foot into a nation that began with an ancient promise made in this land. The Jewish people persisted through one of the most monstrous crimes in human history, and now this nation has come to take its place among the most impressive democracies on earth. Israel’s achievements are a wonder of the modern world.

These achievements are a tribute to the resilience of the Israeli people.  You have managed, against all odds, time and again throughout your history, to persevere, to rise up, and to emerge stronger.

Our two nations are separated by more than 5,000 miles. But for an American abroad, you can’t get much closer to the ideals and convictions of my own country than you do in Israel.  We’re part of the great fellowship of democracies.  We speak the same language of freedom and justice, and the right of every person to live in peace.  We serve the same cause and provoke the same hatreds in the same enemies of civilization.

This is the crux of the special relationship between the United States and Israel. The US doesn’t merely support Israel because Israel’s a strategic ally – though it is. The US supports Israel because of the moral imperative of standing with a country that embraces liberal democracy and Judeo-Christian values, in a sea of ideological darkness that is the Middle East.

Romney spoke beautifully about the Ninth of Av:

It was Menachem Begin who said this about the Ninth of the month of Av:  “We remember that day,” he said, “and now have the responsibility to make sure that never again will our independence be destroyed and never again will the Jew become homeless or defenseless.” “This,” Prime Minister Begin added, “is the crux of the problems facing us in the future.”

So it is today, as Israel faces enemies who deny past crimes against the Jewish people and seek to commit new ones.

When Iran’s leaders deny the Holocaust or speak of wiping this nation off the map, only the naïve – or worse – will dismiss it as an excess of rhetoric.  Make no mistake: the ayatollahs in Tehran are testing our moral defenses.  They want to know who will object, and who will look the other way.

My message to the people of Israel and the leaders of Iran is one and the same: I will not look away; and neither will my country. As Prime Minister Begin put it, in vivid and haunting words, “if an enemy of people says he seeks to destroy us, believe him.”

And Romney pledged that the US would use any options on the table, if he were elected, to prevent a nuclear Iran:

It is sometimes said that those who are the most committed to stopping the Iranian regime from securing nuclear weapons are reckless and provocative and inviting war.

The opposite is true. We are the true peacemakers. History teaches with force and clarity that when the world’s most despotic regimes secure the world’s most destructive weapons, peace often gives way to oppression, to violence, or to devastating war.

We must not delude ourselves into thinking that containment is an option. We must lead the effort to prevent Iran from building and possessing nuclear weapons capability. We should employ any and all measures to dissuade the Iranian regime from its nuclear course, and it is our fervent hope that diplomatic and economic measures will do so. In the final analysis, of course, no option should be excluded. We recognize Israel’s right to defend itself, and that it is right for America to stand with you.

And Romney spelled out that the Arab Spring has truly been an Islamist Spring:

After a year of upheaval and unrest, Egypt now has an Islamist President, chosen in a democratic election. Hopefully, this new government understands that one true measure of democracy is how those elected by the majority respect the rights of those in the minority.  The international community must use its considerable influence to ensure that the new government honors the peace agreement with Israel that was signed by the government of Anwar Sadat.

As you know only too well, since Hamas took control of the Gaza Strip in 2007, thousands of rockets have rained on Israeli homes and cities.  I have walked on the streets of Sderot, and honor the resolve of its people. And now, new attacks have been launched from the Sinai Peninsula.

He concluded on an inspiring note, calling the United States and Israel “in many respects … reflections of one another.” And there was a tacit slap at the Obama administration’s rabidly anti-Israel policies: “We cannot stand silent as those who seek to undermine Israel, voice their criticisms.  And we certainly should not join in that criticism. Diplomatic distance in public between our nations emboldens Israel’s adversaries.” Romney finished:

By history and by conviction, our two countries are bound together.  No individual, no nation, no world organization, will pry us apart. And as long as we stay together and stand together, there is no threat we cannot overcome and very little that we cannot achieve.

Thank you all.  May God bless America, and may He bless and protect the Nation of Israel.