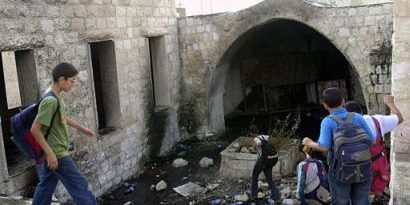 Last week, in the most unlikely of places, I came face to face with the power of Jewish unity. It was well after midnight when the convoy of heavily-guarded Israeli cars and buses began the short drive through the deserted streets of Shechem (Nablus).

Posted along the way were young men in IDF uniforms, keeping a watchful eye on the hundreds of Jews who were braving the late hour and our hostile neighbors to visit an ancient Jewish holy site in the heart of Palestinian-controlled territory.

For years, I had wanted to visit Joseph’s Tomb, the burial place of one of our greatest Biblical forbears and one of Israel’s premier sites of religious, historical and archaeological significance. Indeed, the late Dr. Zvi Ilan, one of Israel’s foremost archeologists, described Joseph’s Tomb as “one of the tombs whose location is known with the utmost degree of certainty and is based on continuous documentation since Biblical times” (Tombs of the Righteous in the Land of Israel, p. 365).

According to the Book of Joshua (24:32), “The bones of Joseph which the Children of Israel brought up from Egypt were buried in Shechem in the portion of the field that had been purchased by Jacob.” Ancient rabbinic texts such as the Midrash mention the site, as did the early Church historian Eusebius of Caesarea, who visited it nearly 1,700 years ago. Arab geographers, medieval Jewish pilgrims, Samaritan historians and even 19th-century British cartographers all concur regarding Joseph’s Tomb and its location.

But ever since Israel ignominiously abandoned the site under a hail of Palestinian gunfire on October 7, 2000, visiting it has become a logistical challenge.

Currently, Israelis are allowed access to the tomb only once a month in the wee hours of the night and under tight IDF supervision.

BASIC PRINCIPLES such as freedom of worship and assembly are tossed aside, with the result being that a total of only about 1,200 Jews are able to visit the tomb in the one night per month that is made available.

That may sound like a lot, but the demand is far greater. During my visit, I noticed how the cellphones of the organizers did not stop ringing, as they were forced to contend with people who were pleading to be granted a space on one of the buses so they could visit the Tomb. Nearly all had to be turned away.

When we arrived at the small compound, which was recently refurbished after having been desecrated by local Palestinians, worshippers descended from the buses and rushed into the tiny room, seeking to get as close to the tomb as possible.

Silent prayers were recited, as various worshippers rocked back and forth, their eyes closed and heads turned heavenwards. Others pulled out small volumes and quietly wept as they read the timeless words of the Psalms.

After putting in a few pleas of my own to the Creator, I looked around the room, marveling at the spiritual power of the place. Many nations pay tribute to their founding fathers, but only the Jewish people do so in such transcendent terms, invoking their righteousness in the hopes of eliciting Divine mercy.

And then a scene caught my eye, one so subtle yet sublime that it took me a few moments to appreciate its splendor.

Standing at the tomb, next to each other, were four men with seemingly nothing in common. One was a Religious Zionist IDF officer in drab green uniform.

Alongside him stood a Hassidic Jew with a long-flowing white beard, dressed in traditional garb. Next to him was a Sephardi policeman standing beside a tourist from America in a baseball cap emblazoned with the letters “NY.”

THESE FOUR Jews all live in different worlds, I thought to myself. Their backgrounds are varied, their customs and ideology are diverse, and even the daily rhythms of their lives are different.

And yet, for a few brief moments, they were all drawn to this holy place, and despite everything which may divide them, they stood there together as one, putting aside all the distinctions and discrepancies.

They were four Jews who had come to pray, nothing more and nothing less.

And that is how it ought to be.

For millennia, Joseph’s Tomb has been a magnet for Jewish pilgrimage and prayer. But nowadays, it is serving an equally important function: as a shrine of Jewish unity and concord. How perfectly ironic, I thought to myself, that Joseph, who had been the victim of sibling rivalry in the Biblical story, would now prove to be such a force in forging Jewish fraternity.

Given our current circumstances, that alone should be reason enough to expand Jewish access to his tomb. Currently, like thieves in the night, Jews are compelled to slip into Shechem under cover of darkness in a monthly arrangement that is as humiliating as it is off-putting. No self-respecting nation would impose such restrictions on visiting a site of such national import, and neither should Israel.

The Jewish state should reassert full control over Joseph’s Tomb and put measures into place that would ensure that Jews can visit whenever they wish, including during daylight hours. Freedom of religion demands no less.

Twice in Jewish history, Joseph was forsaken by his brothers and handed over to foreigners. The first time was in the Biblical story, when he was tossed into a pit and sold to traveling merchants. The second time was in October 2000, when his tomb was surrendered to Palestinian rioters.

It is time that we right that wrong once and for all and take back Joseph’s Tomb and with it, the key to Jewish unity.