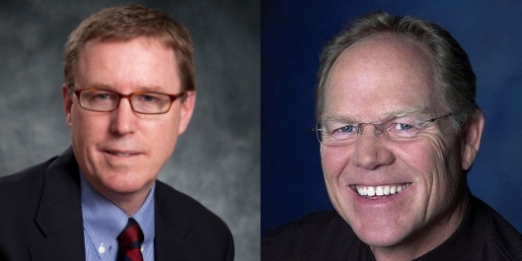 BY MATTHEW HAMILTON, INST. of RELIGION AND DEMOCRACY—

On July 12th, president of the Christian Research Institute Hank Hanegraaff interviewed Gary Burge, theology professor at Wheaton College, president of Evangelicals for the Middle East, and author of Jesus and the Land: The New Testament Challenge to “Holy Land” Theology. The subject of the interview was theological matters pertaining to Christian Zionism and the state of Israel’s relationship with Palestinian Arab Christians.

Hanegraaff came out guns blazing with a preamble condemning Christian Zionists for being racist and supporting ethnic cleansing. He then reminded his listeners that there “is neither Jew nor Gentile” (Galatians 3:28), and following the focus on racism, Hanegraaff argues:

“The problem today is that modern Christian controversialists divide people into categories, and that on the basis of race.”

This was a reference to dispensationalist eschatology which they described as holding that God has special favor for the Jewish race over Gentiles. This branch of eschatology purportedly also holds that as a consequence for crucifying Christ, two thirds of Jews will die in Armageddon after they have reclaimed all the ancient land of Israel. Only after this massive holocaust will the people of Israel be saved.

Gary Burge made the argument that evangelical dispensationalism is a modern rendition of the 1,700 year old Christian theology of anti-Semitism which holds the Jews responsible and punishable for Christ’s death. He argues that despite the dispensationalists’ claims of being pro-Jewish, their eschatology involving the deaths of two-thirds of the Jews is actually anti-Semitic.

Hanegraaff continued with his fixation on racism in Christian Zionism:

“We must thoroughly and finally put to rest any thought that the Bible supports the horrors of racial discrimination wherever and in whatever form… Far from facilitating race based discrimination, on the basis of our eschatological presuppositions, Christians must be equipped to communicate that Christianity knows nothing about dividing people on the basis of race.”

Of course by “the horrors of racial discrimination,” Hanegraaff is referring to Israel’s policy of self-preservation and the measures it takes to protect its citizens from terrorists originating from the Palestinian territories.

As far as racial discrimination is concerned, Israel is one of only two countries in the Middle East that offers Palestinian Arabs full citizenship, the other being Jordan. Even today, Syria, Lebanon, Egypt, Iraq, etc. do not accept Palestinian Arabs as citizens at all. In Israel today, there are 1.6 million Arabs with the vast majority of them being full citizens. In contrast, not even a single Jew lives in Gaza, and not a single Jew lives under the authority of the Palestinian Authority. In fact, under PA controlled territory, it is illegal under penalty of death to sell land to Jews. In Gaza, just being a Jew carries the penalty of death. Singling out Israel while completely ignoring human rights violations in territory under Palestinian control is intellectually dishonest.

Hanegraaff also asks the question: “How do I understand the Palestinian Muslims who are so deeply misunderstood by all parties in the conflict.”

The discussion eventually moved to theology concerning the nature of the state of Israel and whom the land of Israel belongs to. Burge claims that the covenant God made with Abraham for the Jews to possess the land has been broken and therefore the Jews have no theological claim to the land they now possess. The claim is also made that God never intended the Jews to have their own state again and therefore the state of Israel has no theological foundation for existence. Hanegraaff joined in with the assertion that the mistaken theology that God has promised the land to the Jews is what “undergirds Zionism.”

“Undergirds Zionism” is a gross overstatement. It’s understandable that this was a discussion on theological matters and not too historically or geopolitically focused. But the word “undergirds” insinuates that without a theology supporting a Jewish return to their ancestral homelands, there is nothing to support Zionism.

So ignore the historical and cultural connections between Jews and the land of Israel, and ignore the persecution of Jews in nearly every nation where they have ever resided. Hanegraaff apparently sees these as insufficient causes for the Jews to form a state to defend themselves in their land or origin because without a Biblical mandate for the state of Israel to exist, Israel has no right to exist.

Burge told a revealing story about how he teaches the Israeli-Arab conflict:

“I led a group of 35 evangelical students… we all got into a bus and went to this wonderful Palestinian Christian village called Aboud… we spent an entire day in Aboud on a Sunday with Christians who were there, having meals in their homes… it was a great day. And then what happened was a family in Aboud took my students on a walk, and as they walked they began to tell the story of their village, and how it had been encircled, and how many of them had been forced to leave, and oh my gosh, the stories just go on and on. And then you know my students walked out of there and they said, “You just don’t believe it until you see it.”

Of course his students started to turn against Israel and support the Palestinians; who would expect otherwise? In the first place, Burge takes his students to a Christian village. He didn’t take them to one of the Muslim villages with anti-Israeli propaganda posters and posters honoring dead Jihadists plastered along the streets. He didn’t have them watch one of the these lovable characters on Palestinian television:

What should be an even more obvious tactic of deception is that Burge doesn’t take his students to spend a day with Jews who have been assaulted by Hamas rocket fire, or who had a family member killed in a Palestinian terrorist attack, or who live every day of their lives almost completely surrounded by unfriendly states and Jihadists that want all the Jews butchered.

Imagine if a justice system operated with the same principle used by Mr. Burge: the prosecutor walks the jurors through the crime scene and retells the victim’s version of the story; then the jurors make their verdict. The defense never has an opportunity to speak.

You could get anyone to believe almost anything with such a practice. It is intellectually dishonest and deceptive to conduct “education” in such a one-sided fashion.

Hanegraaff and Burge both claim they are not anti-Israel or pro-Palestinian, but neutral in supporting peace and justice. Between being anti-Zionist, demonizing Israel, white-washing human rights abuses by Palestinian rulers in Gaza and the West Bank, and indoctrinating students to support Palestinian Arabs against Israelis, their claims of neutrality appear to be little more than posturing.