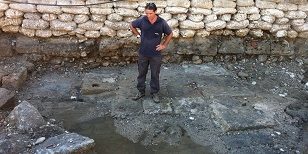 Israel’s Antiquity Authority announced a significant discovery today in Akko, the ancient port city that was home the Crusaders. The ancient harbor, considred the most important harbor in the country from the Hellenistic period was exposed on the seabed. Among the finds there: large mooring stones that were incorporated in the quay, which were used to secure sailing vessels. This is probably a military harbor.

In archaeological excavations that are being conducted by Israel’s Antiquities Authority at the foot of Akko’s southern seawall, installations were exposed belonging to a harbor that operated in the city during the Hellenistic period (third-second centuries BCE). The harbor was the most important port in Israel at that time.

The finds were discovered during the course of archaeological excavations being carried out as part of the seawall conservation project undertaken by the Old Akko Development Company and underwritten by the Israel Lands Administration.

The first evidence indicating the possible existence of this quay was in 2009 when a section of pavement was discovered comprised of large kurkar flagstones dressed in a technique reminiscent of the Phoenician style that is characteristic of installations found in a marine environment. Discovered underwater, this pavement raised many questions amongst archaeologists. Besides the theory that this is a quay, some suggested this was the floor of a large building.

According to Kobi Sharvit, director of the Israel Antiquities Authority Marine Archaeology Unit “Among the finds we’ve discovered now are large mooring stones that were incorporated in the quay and were used to secure sailing vessels that anchored in the harbor c. 2,300 years ago. This unique and important find finally provides an unequivocal answer to the question of whether we are dealing with port installations or the floor of a building. In addition, we exposed collapse comprised of large dressed stones that apparently belonged to large buildings or installations, which was spread of a distance of dozens of meters. What emerges from these finds is a clear picture of systematic and deliberate destruction of the port facilities that occurred in antiquity”. Sharvit adds, “Recently a find was uncovered that suggests we are excavating part of the military port of Akko. We are talking about an impressive section of stone pavement c. 8 meters long by c. 5 meters wide that was partially exposed. The floor is delimited on both sides by two impressive stone walls that are also built in the Phoenician manner. It seems that the floor between the walls slopes slightly toward the south, and there was a small amount of stone collapse in its center. Presumably this is a slipway, an installation that was used for lifting boats onto the shore, probably warships in this case”.   According to Sharvit, “Only further archaeological excavations will corroborate or invalidate this theory”.

The bottom of the ancient harbor was exposed at the foot of the installations. There the mooring stones were found as well as thousands of fragments of pottery vessels, among which are dozens of intact vessels and metallic objects. The preliminary identification of the pottery vessels indicates that many of   them come from islands in the Aegean Sea, including Knidos, Rhodes, Kos and others, as well as other port cities located along the Mediterranean coast.

These finds constitute solid archaeological evidence regarding the location of the Hellenistic harbor and perhaps the military port. According to Sharvit, “It should be understood that until these excavations the location of this important harbor was not clear. Remains of it were found at the base of the Tower of Flies and in the region of the new marina in excavations conducted in the early 1980s by the late Dr. Elisha Linder and the late Professor Avner Raban. But now, for the first time, parts of the harbor are being discovered that are adjacent to the ancient shoreline and the Hellenistic city. Unfortunately, parts of the quay continue beneath the Ottoman city wall – parts that we will probably not be able to excavate in the future.

Nevertheless, in those sections of the harbor that extend in the direction of the sea and the modern harbor the excavation will continue in an attempt to learn about the extent of the ancient harbor, and to try and clarify if there is a connection between the destruction in the harbor and the destruction wrought by Ptolemy in 312 BCE, the destruction that was caused by the Hasmonean uprising in 167 BCE or by some other event.

Akko is located approximately two hours north of Tel Aviv, and approximately 1 hour north of Haifa and is accessible by bus or train. Visitors can tour the ancient city on day tours offered weekly on Sunday, Tuesday and Friday from $85 per person from Tel Aviv and $102 from Jerusalem. , The tours include visits to Caesarea, Akko and Rosh Hanikra, as well as entrance fees, bus transportation and expert guiding.

Elisa L. Moed is the Founder and CEO of Travelujah, the leading Christian social network focused on travel to the Holy Land.