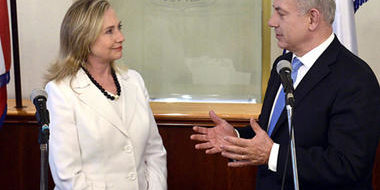 Secretary of State Clinton is in Israel today, which is asurprising fact. According to several news sites, she has not visited there in two years.

Secretary Condoleezza Rice visited there about 20 times, by my rough count. What accounts for this difference? Giventhe importance the United States usually places on the Israeli-Palestinian conflict, how is it that a secretary of statecould be absent for two entire years?

There are two reasons, I would judge. First, President Obama has always turned to others–initially his specialenvoy George Mitchell, appointed on Mr. Obama’s second day in office, and later Dennis Ross–to do thediplomacy that was needed (or not needed, but that’s another story). He has never viewed Clinton as his topdiplomat when it came to the Middle East.

Second, Clinton must have made a judgment a couple of years ago that visiting Israel and the West Bank was a losingproposition. After all, two years ago (in September, 2010) the White House staged an extravaganza to launch peace talks,inviting President Mubarak, King Abdullah of Jordan, Israel Prime Minister Netanyahu, and PLO chairman Mahmoud Abbas.The talks broke down within weeks, and George Mitchell’s last trip to the region came in December 2010. It appearsthat Clinton looked at the wreckage and decided she had better ways to spend her time.

Is this theory contradicted by her presence in Israel today? Not really, because she was visiting Egypt’s newpresident and its military leadership, and because there are other hot subjects to discuss now, such as the war inSyria. And given the presence on her delegation of the administration’s Iran negotiator, Wendy Sherman, her maintopics with the Israelis are likely to be Iran, Syria, and Egypt, with a discussion of Palestinian matters thrown in atthe end to be sure they could all say “sure, yes, absolutely, that was discussed in depth!” But theSecretary’s attention is elsewhere, on some dangerous crises, and it is very difficult to say that her absencefrom Israel for two years was a mistaken decision.