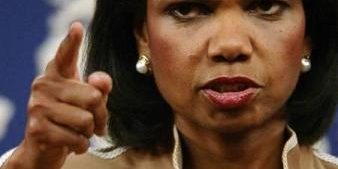 I’ve heard and read many speeches on the Arab-Israeli conflict. Those made by well-known, hostile critics of Israel always caused me great pain by their use of hyperbole, absurd analogy and falsehoods. But I was not prepared for a speech by an American secretary of state with those very attributes, such as the keynote address delivered last week by Condoleezza Rice to the gala dinner of the American Task Force on Palestine in Washington.

Secretary Rice stated that “there could be no greater legacy for America than to help to bring into being a Palestinian state.” Really? What type of legacy would it be to reward the Palestinians, who are among the most pro-terrorist societies in the world, with statehood?

Despite Rice’s claims about “moderate Palestinians,” their own polls show that Palestinians consistently approve of suicide bombings and terrorism (57% and 61% in two September polls), rocket attacks on Israel (63% in September) and the kidnapping of Israeli soldiers (75% in September). An August 2006 poll showed that 97% of Palestinians supported Hezbollah’s actions. Successive Palestinian polls over recent years always show high levels of support for the so-called “right of return.”

Rice also drew an analogy between Palestinian dreams for statehood and the American struggle for independence. This not only implies an odious comparison of Yasser Arafat and Hamas leaders to George Washington and Thomas Jefferson; it also ignores the Palestinians’ promotion of Israel’s destruction and their hatred and murder of Jews. The Palestinians’ real goals are made clear by the incitement in the speeches of their leaders and in the media, mosques, schools and youth camps under the control of the Palestinian Authority. P.A. maps, atlases and textbooks display no country called Israel. They name streets, schools and sports teams after suicide bombers. America’s founding fathers didn’t want to destroy England and its civilians; they simply wanted independence.

Under current circumstances, a Palestinian state would simply be another terrorist state. Especially now, with the rise to power of Hamas, it is simply wrong to even discuss the possibility of a Palestinian state. Statehood would give Hamas and other Palestinian terrorist groups greater power and opportunity to promote their terrorist agenda; it would not moderate them. Iranians, Syrians and North Koreans have their own sovereign states. This has not made them peace-loving societies. Sovereignty does not transform the society; to the contrary, it only strengthens the ability to promote the values of that society, however hateful. And would creating a state really be a “greater legacy” for America than ending Islamic terrorism or preventing North Korea and Iran from becoming nuclear powers?

By echoing Palestinian propaganda statements, such as her reference to the “daily humiliation of occupation,” Rice ignored the fact that Judea, Samaria and Gaza are not occupied territory but disputed territory — territory, in fact, to which Israel’s religious, political and historical claims are far stronger than Arab claims. Rice didn’t acknowledge that these lands had been illegally occupied by Jordan and Egypt from 1948 to 1967 before coming under Israeli control in the 1967 war of self-defense. She also ignored that Israel ceded half of Judea and Samaria and all of Gaza, lands in which 98% of the Palestinian Arab population resides. Therefore, how can it be said that Palestinians are “occupied”?

Palestinians themselves have repeatedly rejected statehood as proposed by the 1937 Peel Commission, the 1947 United Nations partition plan and Ehud Barak’s 2000 peace plan, preferring war and terrorism in pursuit of their goal to destroy Israel. The issue has never been about land or statehood, only about Israel’s elimination. Moreover, Israeli security measures such as checkpoints, road-blocks and curfews have only been employed because of Israel’s need to protect itself from Palestinian terrorism against Jews. No Arab terrorism — no Israeli checkpoints.

Throughout this speech, Rice repeatedly pledged her support for P.A. President Mahmoud Abbas, calling him a “moderate leader.” But is he a moderate leader? He co-founded the terrorist group Fatah with Yasser Arafat and was his deputy for 40 years. He funded the Munich massacre. He wrote a Ph.D. thesis and a book denying the Holocaust. As president of the P.A., Abbas said “it is our duty to implement the principles of Yasser Arafat.” He refers to terrorists as “heroes fighting for freedom.” He rebuffed President Bush’s call at the 2005 Aqaba summit to accept Israel publicly as a Jewish state. He declared that neither Fatah nor Hamas need to recognize Israel. He approved legislation mandating financial benefits to be paid to families of Palestinian shahids — that is, dead terrorists. He praised the Lebanese terror group Hezbollah and endorsed the so-called Prisoners’ Plan, which supports terrorism, does not accept Israel’s legitimacy as a Jewish state, abrogates Palestinian obligations under past agreements and insists on the “right of return.”

But Secretary Rice ignored all of this and delivered the most pro-Palestinian speech in memory by a senior U.S. administration official. This speech is surely at odds with an administration that claims to be “the best friend Israel ever had.” If the president does not subscribe to the themes in her speech, he should publicly distance himself from it immediately.

Morton A. Klein is national president of the Zionist Organization of America.