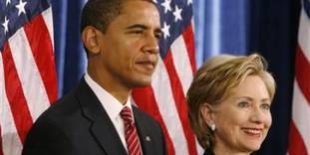 How much does Barack Obama hate Israel and want to throw her under the bus? Here’s how much; the Obama administration not only excluded Israel from a new counterterrorism forum in Spain, it didn’t even mention Israel in its remarks. If there were ever a country that has dealt with murderous terrorist attacks over and over again, that country would be Israel.

Here’s what Maria Otero, the State Department’s Under Secretary for Civilian Security, Democracy, and Human Rights, said:   Last September at the official launch of the Global Counterterrorism Forum, I had the privilege to introduce the premiere of a film ‘Hear their Voices’, which tells the stories of eleven survivors of terrorist attacks from Pakistan, Jordan, Northern Ireland, Uganda, Turkey, Indonesia, India, Spain, Columbia, and the United States. The film, which was produced by the Global Survivors Network, is a powerful plea for audiences around the world, especially those sympathetic to the grievances expressed by extremists, to recognize the human cost of terrorism and I am delighted that our Spanish hosts are planning on showing this film here later this afternoon.

When Secretary of State Hillary Clinton announced the coalition’s formation in June, she didn’t include Israel on her list of countries that suffer from terror attacks.  In the controversy that followed, the supposition was that Obama and his minions caved into pressure from Turkey, whose leadership has become Islamist, and other Arab states, which hate Israel.

Defenders of Israel were furious, even those who were Democrats.  Josh Block, a Democratic strategist and former spokesman for AIPAC, said,   When the administration promised to include Israel in the counterterrorism forum that the United States founded—after Jerusalem’s inexplicable exclusion from the initial meeting a month ago—one would think they would be true to their word. Clearly someone failed here.  How Israel could be excluded from another meeting of an anti-terror forum that we chair is beyond comprehension, especially one that focuses on victims of terrorism. At a time when Romney is challenging the administration’s record on U.S.-Israel relations, this error stands out.   First of all, Mr. Block, no one failed here. Obama succeeded beyond his wildest dreams, kissing the posteriors of Arab states and knifing Israel in the back. Block should be ashamed of himself if he ever thought Obama was a friend to Israel; all Jews should know better than that.

Jonathan Schanzer, vice president for research at the Foundation for Defense of Democracies, said:

What we’re seeing is a trend of Israel being left out of the global discussion on terrorism, while Israel was extremely helpful during the beginning stages of this conversation. The administration is downplaying the struggle that Israel has been enduring. I believe to a certain extent, this is due to regional politics, and it’s disconcerting to see this change. It just looks like a quiet effort to downplay the issue.

The State Department would not answer questions about the matter. Maybe they should look here and see how each one of the 1,220 Jews killed in Israel because they were Jews died.   For a Jew to vote for Barack Obama, who has betrayed Jews time after time, is a travesty. For Barack Obama to betray Jews, as he did when he cheered Rashid Khalidi, listened to Jeremiah Wright and Louis Farrakhan, paved the way for the Muslim Brotherhood, and excluded Israel from the group they belong in as much as any other country, comes as naturally as breathing.