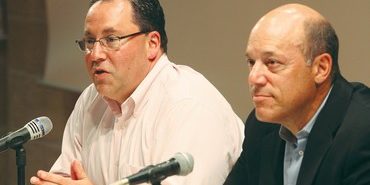 The lack of support for US President Barack Obama from Jews in Israel acted as a harbinger for their counterparts in the United States, Republican Jewish Coalition executive director Matt Brooks and GOP strategist Ari Fleischer told The Jerusalem Post on a visit to Israel Tuesday.

Brooks and Fleischer came to Jerusalem to support the IVoteIsrael campaign, which aims to register as many as possible of the 150,000 American citizens in Israel who are eligible to vote in the November 6 election.

They cited polls in the Post going back to June 2009, which found that only a small percentage of Israelis considered the Obama administration more pro- Israel than pro-Palestinian.

“The polls in The Jerusalem Post reverberated around the Jewish community in America,” Fleischer said. “They were an early warning signal in the US that there were cracks in Obama’s armor. In 2009 American Jews were so pro-Obama. Israelis saw the cracks first, and now the American Jewish community is going through a significant case of buyer’s remorse.”

Brooks said they came to Israel because the number of eligible voters in the Jewish state was similar to key battleground cities like Fort Lauderdale, Florida or Dayton, Ohio. He noted that thousands of votes from American-Israelis would be counted in those states.

“I am a survivor of the 2000 election in the US ,” Fleischer said. “If this race will be equally close, there is a possibility that a large number of absentee ballots coming into Florida, Pennsylvania and Ohio can make the difference. It is also important to plant a flag on Israeli soil. Politicians notice a massive boost in voting like there could be here.”

He said the US Embassy had even added more times to submit voter registration forms due to the large number of forms they were receiving via IVoteIsrael. Pieprz stressed that his organization was bipartisan and would facilitate the visit of Democratic Jewish leaders as well.

Brooks admitted that a majority of US Jews would continue to vote Democratic.

He said his goal was to continue the pattern of a higher percentage of American Jews voting Republican each presidential election.

“There is no doubt that Mitt Romney will do extremely well among Jewish voters,” Brooks said. “Success will be the continuing process of gaining market share at the expense of the Democrats, especially in key battleground states.”