Mahdi fever fueling confidence behind threats to Israel & US 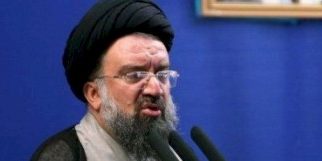 A senior Iranian cleric is warning Israel that if it attacks the Islamic state’s nuclear facilities, it will be burned to the ground.

In an event dubbed “Followers of Hidden Imam,” Ayatollah Seyed Ahmad Khatami, a member of the Assembly of Experts and the substitute Friday Prayer leader of Tehran, said, “Should Israel commit madness, it will turn into ashes within seconds,” according to Fars News Agency, the Revolutionary Guards’ media outlet.

Shiites believe their 12th Imam, Mahdi, will reappear at the end of times and kill all infidels, raising the flag of Islam in all four corners of the world.

The attendants at Tuesday’s event, which was organized by the cultural center for the “Hidden Imam” in the city of Shiraz, discussed actions needed for the reappearance of the last Islamic messiah.

“The followers of the Imam have one thing in common, and that is a love for martyrdom and complete submission to their leader,” Khatami said. “The heartbeat of the nuclear issue is in the hands of the supreme leader (Ayatollah Ali Khamenei), and the decision of what to do with America is only upon him.”

As revealed in the Iranian documentary “The Coming Is Upon Us,” centuries-old hadiths have predicted the current climate in the Middle East – the fall of Saddam Hussein in Iraq and Hosni Mubarak in Egypt, and the events in Afghanistan and other parts of the region – which has Iran’s radical leaders excited the time for Mahdi’s reappearance is ever closer.

More importantly, the hadiths cited in the documentary said the two most important events that would trigger the coming would be the death of Saudi King Abdullah (who is currently very ill) and then the destruction of Israel.

An editorial in the Iranian Keyhan newspaper on Wednesday laid out the plans for the coming and said Iran’s influence has spread throughout the world and this “earthquake” is the beginning of Islam taking power. The Keyhan newspaper is directly under the supervision of Iran’s supreme leader.

“For the Zionists and the Christians, who know the miserable destiny of the Jews, they themselves are followers of evil and are damned in the kingdom of Allah,” the editorial said, calling Khamenei the deputy of the last Islamic messiah on earth and Hassan Nasrollah, the leader of the Lebanon terrorist group Hezbollah, his commander. “There is clarity in the words of Allah in regards to the Jews – ‘they broke their oath, therefore we damned them and made their hearts out of stone’ – so that they cannot be forgiven.”

The followers of the “Hidden Imam,” the editorial says, are those whose “hearts are of steel; they have no doubt about God, they are solid as a rock, their victorious flag will free every city… they will embrace their Imam and will sacrifice their lives under his command.”

Meanwhile, other Iranian reports indicate the regime is planning a serious and unexpected response to recent European and U.S. sanctions on Iran’s oil and central bank.

The head of the Revolutionary Guards aerospace division, Gen. Amir Ali Hajizadeh, Wednesday told Fars News Agency that, “All of occupied territories (Israel) and all U.S. bases in the region are within our (missile) range and, in case of war, within the first minutes all will be destroyed.”

The statement followed a recent military drill in which the Revolutionary Guards fired ballistic missiles at mock targets across Iran even as their nuclear program continued unabated despite U.N. sanctions.

Opposition leaders inside and outside Iran worry the West is vacillating and allowing Iran to pursue its destructive goals. They wonder why it is not helping the Iranians, a majority of whom despise the mullahs’ leadership, with regime change.

Reza Kahlili is a pseudonym for a former CIA operative in Iran’s Revolutionary Guards and the author of the award winning book, A Time to Betray. He is a senior Fellow with EMPact America, a member of the Task Force on National and Homeland Security and teaches at the U.S. Department of Defense’s Joint Counterintelligence Training Academy (JCITA).