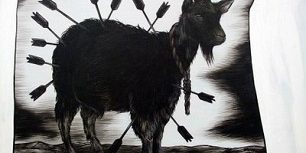 Another group of Christian peacemakers has issued yet another statement about the Arab-Israeli conflict. The authors of this document state their goal is to “respond faithfully and boldly to the situation in Israel and Palestine.” Apparently in the lexicon of the folks who wrote this document – a group that calls itself “Kairos USA” – “situation” is another word for “conflict” or “war” and “responding faithfully and boldly” means focusing the eye of Christian judgment on Israel and its alleged sins like the Eye of Sauron looking for the holder of the One Ring on the slopes of Mount Doom.

Unlike Sauron, the folks who wrote this document found what they are looking for – a scapegoat upon which they foist all the blame for Palestinian suffering. This can be seen in the visual rhetoric offered by the group’s website, which shows pictures of the security barrier and juxtaposes them with pastoral images of the Holy Land. The implication is obvious – Israeli security measures are a blot on the Holy Land.

Just to give you a sense of how distorted the text is, the Jewish Council for Public Affairs accurately reports that the 8,000-word document does not include the word Hamas.

About the best thing that can be said about the text is that it laments the suffering of long-dead Jews at the hands of their long-dead anti-Semitic murderers. Christian oppression of Jews, the authors acknowledge “culminated in the attempted extermination of the Jewish people in the heart of Europe in the mid-20th century.”

Confronting modern-day expressions of anti-Semitism in the Middle East of the 21st century, however, is beyond the prophetic imagination the people who wrote this text. In the minds of Kairos USA, pointing out Muslim and Islamist anti-Semitism is an act of “Islamophobia.” Pretty ironic coming from people who remind us that not all criticism of Israel is anti-Semitic.

Kairos USA bills its document as a response to another document, this one issued by a group of Palestinian Christians in December 2009. This previous document, typically referred to as Kairos Palestine is a reworking of anti-Zionist and anti-Semitic themes that have been invoked by Arab Christians against the modern state of Israel for decades.

For example, the document imposes a higher standard on the Jewish state by asserting that the Holy Land on which it is located has a “universal mission.” The document then uses the notion of a universal mission to assess Israeli policies while ignoring the misdeeds of its adversaries a pass.   The Kairos Palestine Document also asserts that “If there were no occupation, there would be no resistance, no fear and insecurity.” Given that Israel has been attacked from nearly every bit of land from which it has withdrawn since the 1990s, this is simply ridiculous, but this hasn’t stopped the people in Kairos USA from stating “we affirm the validity and accuracy of this analysis.” This isn’t analysis. It’s wishful thinking.

One interesting aspect of Kairos USA’s statement is how easily its critique of Christian Zionism and Israeli policies can be adapted to critique Muslim doctrine and Islamist ideology regarding non-Jews and the modern state of Israel. The authors state that “Theologies that privilege one nation with political entitlements to the exclusion of others miss a central tenet of the Gospel and inspire increased conflict.”

This seems like a pretty good critique of the Muslim doctrine that calls for the subjugation of non-Muslims in Muslim majority societies and the Islamist ideology that calls for Israel’s destruction. But don’t try telling that to the authors of this document because that’s Islamophobia. The central insight of the document – that religious doctrine matters, can only be used to assess the behavior and beliefs of Americans, Israelis, Christians and Jews – not Muslims and Arabs.

The authors obliquely concede that there has been a “radicalization of Islamic identity” but then assert this radicalization has been fueled by Israeli injustice against the Palestinians, beginning in 1948 and intensifying in 1967 and thereafter.” What the authors fail to acknowledge, however, is that there were Palestinian leaders who were willing to make peace with the Palestinians prior to the 1948 War, but these leaders were killed and marginalized by the Grand Mufti of Jerusalem, who during and after World War II helped introduce Nazi hostility into the Middle East.

The underlying message of the Kairos Document is that Christians in the United States and in the West really do not have to take Muslim and Islamist hostility toward Jews and Israel seriously until after the Israelis figure out a way to make peace with the Palestinians.

It is a fantasy, but maybe it is an improvement from what we’ve seen in the past. In previous epochs, Christians looked for, and found, manifold excuses to murder Jews. These days, they are not looking for excuses to murder Jews, but merely excuses to ignore hostility and violence toward Jews when exhibited by their neighbors in the Middle East.

Apparently, in the moral universe of these Christian peacemakers, the move from perpetrator to bystander is a step up, a move toward redemption.   Who knew?