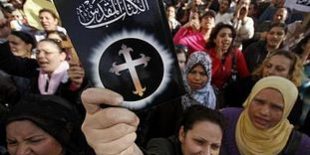 Home to one of the oldest Christian communities in the world, the city of Beit Jala — located on a hill adjacent to Bethlehem — still boasts a large number of worshippers. This fact makes the town unique among Palestinian towns, which have generally seen their Christian populations decline.

“People are leaving Palestine in droves. Jenin, Aboud, Nablus — these cities have lost much of their Christian population, some villages and towns have no more than two to three families,” said Peter, a 25-year-old resident of Bethlehem who agreed to be interviewed for this article on condition that his real name not be used.

Statistics show that more than 60 percent of the Arab Christians born in Palestinian areas over the past several generations now live abroad. Totaling some half a million people worldwide, 360,000 of them currently reside in dispersed communities in Canada, Chile, the United States, Germany, Australia and other countries. 154,000 remain in Israel and the Palestinian-controlled territories, with about 35,000 living in the West Bank and less than 3,000 in the Gaza Strip.

The flight of Christian is a growing trend across the Middle East. In Iraq, for example, the ancient Assyrian Christian community dropped from 1.5 million people to just 250,000 since the Second Gulf War broke out in 2003. Christians are leaving Lebanon en mass, with 60 percent of their beleaguered community now living in foreign lands. The Coptic Church in Egypt has lost tens of thousands of parishioners following the dramatic events of the “Arab Spring.”

As experts look for different ways to explain the phenomenon, Peter has his own answer: “We enjoy religious freedom but I still feel like a second-class citizen,” he told Israel Today. “We are allowed to pray in churches and are given religious holidays but I’m constantly reminded of being a minority in a Muslim land,” he continued, referring to instances of discrimination against Christians.

“Christian women are very often harassed, insulted, or simply not given due respect only because they refuse to cover their hair,” he pointed out. “Muslims will not think twice to express their dissatisfaction with a Christian listening to religious recitations in his cab. Had Christians dared to do the same, massive wrath would surely follow,” Peter told us.

According to Peter, the problems for West Bank Christians started in 1993, the year the area was handed over from Israel to the Palestinian Authority. With the eruption of the Second Intifada in 2000, the situation deteriorated even further.

During that conflict, Islamist militants affiliate with Palestinian leader Mahmoud Abbas’ Fatah movement used the town of Beit Jala as a base to launch sniper and mortar attacks on the Jerusalem neighborhood of Gilo. When the Israeli army was compelled to respond, it caused severe damage to the Christian houses and churches from which the attacks were launched.

But even after the uprising was over, Christians have reported numerous cases of illegal seizure of their property by Muslims from Hebron and other parts of the West Bank. Khaled Abu Toameh, a prominent Arab writer for the Jerusalem Post, reported in his article from June 2012 that the property-related complaints of West Bank Christians — filed with the Palestinian Authority, the Vatican, and European leaders — have fallen on deaf ears.