The seven principles of leadership 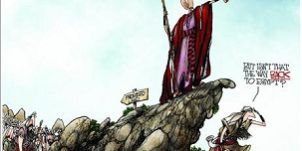 As all of America  knows today, President Obama has aggressively sought during his presidency to “fundamentally transform” America. After five trillion dollars of borrowing and spiraling national debt, ObamaCare being passed over the objections of the majority of Americans through legislative back door deals with resistant politicians, failing stimulus and “green” programs left and right as taxpayers are left holding the bag, an economic recovery that is nothing more than wishful thinking, an America that has been denied her exceptional status as the leader of the world, by the man who promised to unite us.  America today and I say this sadly is weaker abroad and at home. Obama has adopted a leadership mindset of self-validation; ‘This works for me, so it must be right.’ Yes my friends, America has been fundamentally transformed.  Mission Accomplished.

Just a few months ago, when Obama was a sure bet as far as being re-elected, an open mic caught Obama speaking freely from his heart in a moment of unrestricted candor. Obama speaking to the leader of America’s chief rival, Russian President Dmitry Medvedev, was caught saying that once safely re-elected he would have the “flexibility” to please Russia better than he could now before the election. That admission, that moment of truth, alerted much of the wavering public, that much of what they have been hearing during Obama’s re-election campaign would bear little if any resemblance to the policies that a second Obama administration would adopt. That event also brought into question the leadership qualities of Obama.

Chief Rabbi Lord Jonathan Saks of England has formulated a list of leadership qualities based on biblical examples that draw vivid attention to what a true leader should exhibit and how he should express his leadership in a complex and demanding reality.

The opening chapters of Genesis are about failures of responsibility. Confronted by God with their sin, Adam blames Eve, Eve blames the serpent. Even Noah, a “righteous, perfect in his generations,” has no effect on his contemporaries.

Moses, could have avoided each of these confrontations, yet he did not. He is the supreme case of one who says: when I see wrong, if no one else is prepared to act, I will.

Principle 2: No one can lead alone

Seven times in Genesis 1, we hear the word “tov” (good). Only twice in the whole Torah does the phrase “lo tov” (not good) appear. The first is when God says, “It is not good for man to be alone.” The second is when Jethro sees his son-in-law, Moses, leading alone and says, “What you are doing is not good.” We cannot live alone. We cannot lead alone. Leadership is teamsmanship.

Principle 3: Leadership is about the future. It is vision-driven

Moses experiences a vision at the burning bush. There he is told his task: to lead the people from slavery to freedom. He has a destination: the land flowing with milk and honey. He is given a double challenge: to persuade the Egyptians to let the Israelites go and to persuade the Israelites to take the risk of going.

His greatest leadership act occurs in the last month of his life. He gathers the people together on the bank of the Jordan and speaks. There he rises to the greatest heights of prophecy, his eyes turned to the furthest horizon of the future. He tells the people of the challenges they will face in the Promised Land. He sets forth his vision of the good society.

Before you can lead, you must have a vision of the future and be able to communicate it to others.

They study more than others do. They read more than others do. The Torah says that a king must write his own Sefer Torah which “must always be with him, and he shall read from it all the days of his life” (Deut. 17: 19). Joshua, Moses’s successor, is commanded: “Keep this Book of the Law always on your lips; meditate on it day and night” (Josh. 1: 8).

This is so even in secular leadership. William Gladstone had a library of more than 30,000 books. He read more than 20,000 of them. Gladstone and Benjamin Disraeli were both prolific writers. Winston Churchill wrote some 50 books and won the Nobel Prize for Literature.

Principle 5: Leadership means believing in the people you lead

The rabbis gave a remarkable interpretation of the passage in which Moses says about the Israelites, “They will not believe in me.” God said to Moses: “They are believers the children of believers, but in the end you will not believe.” They also said that the sign God gave Moses when his hand became leprous (Ex. 4:6) was a punishment for casting doubt on the Israelites.

A leader must have faith in the people he or she leads.

Principle 6: Leadership involves a sense of timing and pace

When Moses asks God to choose his successor, he says: “May the Lord, the God who gives breath to all living things, appoint someone over this community to go out before them and come in before them, who will lead them out and bring them in” (Num. 27: 16-17).

A leader must lead from the front: he or she must “go out before them.” But a leader must not be so far out in front that, when he turns around, he finds no one following. He must “lead them out,” meaning, he must carry people with him. He must go at a pace that people can bear.

Leaders lead because there is work to do, there are people in need, there is injustice to be fought, there is wrong to be righted, there are problems to be solved and challenges ahead. Leaders hear this as a call to light a candle instead of cursing the darkness. They lead because they know that to stand idly by and expect others to do the work is the too-easy option. To lead is to serve; The highest accolade Moses ever received was to be called “eved Hashem“ – “God’s servant” – and there is no higher honor.

The single overarching quality of America’s leader must not be based on “transforming America” to something that she is not. Stuff like free contraception, no actual energy just imaginary green stuff, open borders, gay marriage and warmer relations with Islamic and leftist dictators are not what the little guy on Main Street wants. Those little people really just wanted jobs; wanted to keep their homes; wanted to be able to afford food, clothing and education and energy; wanted a thriving economy. A true leader would know this.

The writer, a 25-year veteran of the I.D.F., served as a field mental health officer. Prior to retiring in 2005, served as the Commander of the Central Psychiatric Military Clinic for Reserve Soldiers at Tel-Hashomer. Since retiring from active duty, he provides consultancy services to NGO’s implementing Psycho trauma and Psychoeducation programs to communities in the North and South of Israel. Today Ron is a strategic advisor to the Shomron Liaison Office.