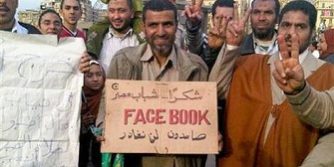 Last Friday, the day before voters by most accounts elected the Brotherhood’s candidate Mohamed Morsy to serve as Egypt’s next president, The Wall Street Journal published a riveting account by Charles Levinson and Matt Bradley of how the Brotherhood outmaneuvered the secular revolutionaries to take control of the country’s political space.

The Brotherhood kept a very low profile in the mass demonstrations in Tahrir Square in January and February 2011 that led to the overthrow of then-president Hosni Mubarak. The Brotherhood’s absence from Tahrir Square at that time is what enabled Westerners to fall in love with the Egyptian revolution.

Those demonstrations led to the impression, widespread in the US, that Mubarak’s successors would be secular Facebook democrats. The role that Google’s young Egyptian executive Wael Gonim played in organizing the demonstrations was reported expansively. His participation in the anti-regime protests – as well as his brief incarceration – was seen as proof that the next Egyptian regime would be indistinguishable from Generation X and Y Americans and Europeans.

In their report, Levinson and Bradley showed how the Brotherhood used the secularists to overthrow the regime, and to provide them with a fig leaf of moderation through March 2011, when the public voted on the sequencing of Egypt’s post-Mubarak transformation from a military dictatorship into a populist regime. The overwhelming majority of the public voted to first hold parliamentary elections and to empower the newly elected parliament to select members of the constitutional assembly that would write Egypt’s new constitution.

As Egypt’s largest social force, the Brotherhood knew it would win the majority of the seats in the new parliament. The March 2011 vote ensured its control over writing the new Egyptian constitution.

In July 2011, the Brotherhood decided to celebrate its domination of the new Egypt with a mass rally at Tahrir Square. Levinson and Bradley explained how in the lead-up to that event Egypt’s secular revolutionaries were completely outmaneuvered.

According to their account, the Brotherhood decided to call the demonstration “Shari’a Friday.” Failing to understand that the game was over, the secularists tried to regain what they thought was the unity of the anti-regime ranks from earlier in the year.

“Islamists and revolutionary leaders spent three days negotiating principles they could all support at the coming Friday demonstration in Cairo’s Tahrir Square. They reached an agreement and the revolution seemed back on track.”

One secularist leader, Rabab el-Mahdi, referred to the agreement as “The perfect moment. A huge achievement.”

But then came the double cross.

“Hours before the demonstration, hard-line Salafi Islamists began adorning the square with black-and white flags of jihad and banners calling for the implementation of Islamic law. Ms. Mahdi made frantic calls to Brotherhood leaders, who told her there was little they could do.”

THE DIFFERENCE between the Brotherhood and the secularists is a fundamental one. The Brotherhood has always had a vision of the Egypt it wants to create. It has always used all the tools at its disposal to advance the goal of creating an Islamic state in Egypt.

For their part, the secularists have no ideological unity and so share no common vision of a future Egypt. They just oppose the repression of the military. Opposing repression is not a political program. It is a political act. It can destroy. It cannot rule.

So when the question arose of how to transform the protests that caused the US to abandon Mubarak and sealed the fate of his regime into a new regime, the secularists had no answer. All they could do was keep protesting military repression.

The Brotherhood has been the most popular force in Egypt for decades. Its leaders recognized that to take over the country, all they needed was the power to participate in the elections and the authority to ensure that the election results mattered – that is, control over writing the constitution. And so, once the secularists fomented Mubarak’s overthrow, their goal was to ensure their ability to participate in the elections and to ensure that the parliament would control the constitution-writing process.

While instructive, the Journal’s article fell short because the reporters failed to recognize that the Brotherhood outmaneuvered the military junta in the same way that it outmaneuvered the secularists. The article starts with the premise that the military’s decision to stage an effective coup d’etat last week spelled an end to the Egyptian revolution and the country’s reversion to the military dictatorship that has ruled the state since the 1950s.

Levinson and Bradley claim, “Following the rulings by the high court this week , the Brotherhood’s strategy of cooperation with the military seems failed.”

But actually, that is not the case. By permitting the Brotherhood to participate in the elections for parliament and the presidency, the military signed the death warrant of its regime. The Brotherhood will rule Egypt. The only thing left to be determined is whether its takeover will happen quickly or slowly.

Ten years later, Turkey is a populist, authoritarian, Islamic state. Half the general officer corps is in prison, held without charge or on trumped up charges. Turkey’s judiciary and civil service are controlled by Islamists. The AKP is filling the military’s officer corps with its loyalists.

The Egyptian military today is far weaker than the Turkish military was in 2002. And it has already been outmaneuvered by the Brotherhood. The only way for it to secure its hold on power is through brute force. And the generals have already shown they are unwilling to use sufficient force to repress the Brotherhood.

The regime’s decision to outlaw the parliament and decree the military above the president was not a show of strength. It was a panicked act of desperation by a regime that knows its days are numbered. So was its decision to delay announcing the winner of the presidential elections.

When Morsy declared victory in the presidential elections on Sunday, he did so surrounded by members of the just-dissolved parliament. His act was a warning to the military. The Brotherhood will not allow the ruling to stand.

THE INEVITABILITY of the Islamic takeover of Egypt means that the peace between Israel and Egypt is meaningless. Confrontation is coming. The only questions that remain are how long it will take and what form it will come in. If it happens slowly, it will be characterized by a gradual escalation of cross-border attacks from Sinai by Hamas and other jihadist groups. Hamas’s sudden eagerness to take responsibility for the mortar attacks against southern Israel as well as Monday morning’s murderous cross-border attack are signs of things to come.

With the Brotherhood ascending to power, the security cooperation Israel has received from the Egyptian security forces in Sinai is over. And the regime won’t suffice with doing nothing to stop terror. It will encourage it. Just as the Egyptian military sponsored and organized the fedayeen raids from Gaza in the 1950s, so today the regime will sponsor and eventually organize irregular attacks from Sinai and Gaza.

In the rapid-path-to-confrontation scenario, the Egyptian military itself will participate in attacks against Israel. Egyptian troops may take potshots at Israelis from across the border. They may remilitarize Sinai. They may escalate attacks against the US-commanded MFO forces in Sinai that are supposed to keep the peace with the goal of convincing them to withdraw.

Whether the confrontation happens tomorrow or in a year or two, the question of whether the military remains the titular ruler of Egypt or not is irrelevant to Israel.

In their attempt to maintain their power and privilege, the first bargaining chip the generals will sacrifice is their support for the peace with Israel. With the US siding with the Brotherhood against the military, maintaining the peace treaty has ceased to be important for the generals.

This dismal situation requires Israel’s leaders to take several steps immediately. First, our leaders must abandon their diplomatic language regarding Egypt. No point is served by not acknowledging that the southern front – dormant since 1981 – has reawakened and that Israel’s peace with Egypt is now meaningless.

Recall that it was under Mubarak’s leadership that the Egyptian media reported that the Mossad was deploying sharks as secret agents and ordering them to attack tourists along Egypt’s seacoast in an effort to destroy Egypt’s tourism industry.

Since Israel doesn’t need to actually do or say anything to cause the Egyptians to attack, we might as well be honest in our own discussion of the situation. At a minimum, frank talk will ensure that the steps we take on the ground to meet the challenge of Egypt will be based on reality and not on an attempt to ignore reality.

Straight talk is also important in the international arena. For the past 30 years, in the interest of protecting the peace treaty, Israel never defended itself against Egypt’s diplomatic assaults on its very right to exist. Now it can and must fight back with full force.

At a minimum, this will enable Israel to wage a coherent diplomatic defense of whatever military action it will eventually need to take to defend itself against Egyptian aggression.

As to that aggression, we don’t have any good options on the ground. We cannot operate openly in Sinai. If we retaliate against missile attacks with air strikes, the Brotherhood-led Egyptian government will use our defensive action to justify war. So we need to massively expand our ability to operate covertly.

Aside from that, we must equip and train our military to win a war against the US-trained and-armed Egyptian military.

However the Egyptian election results pan out, the die has been cast. We must prepare for what is coming.