"Never again" or "again and again" 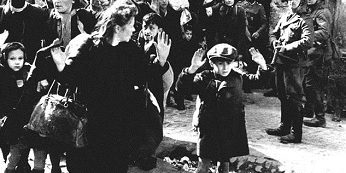 After the world’s descent into the 20th century abyss of staggering crimes against humanity consisting of two world wars, the Holocaust, scores of regional wars, massacres, pogroms, mass starvation, genocides in Ruanda, Nigeria, Cambodia and the Sudan, we now are into the beginning of the second decade of the 21st century and are faced again and again with man’s inhumanity towards his fellow man.

When, after the end of World War Two, the extent of Nazi Germany’s systematic extermination of the 6 million Jews of Europe, became horribly apparent, including the murder of one and a half million babies and children, there arose the cry: “Never Again.”

It was assumed that a horror of such magnitude, perpetrated by millions of Adolf Hitler’s obedient and willing executioners, using all the tools of perverted science, must never again occur in the world. But the lesson of that cataclysmic genocide has been shamefully ignored.

After the war an organization was set up called the United Nations – a body created to work for international peace and primarily at first consisting of democracies, along with a few autocratic regimes, which nevertheless were relatively rational. And as delegates entered the UN building they passed by the wall on which were written the biblical words of the Jewish prophet, Isaiah:

“They will beat their swords into plowshares and their spears into pruning hooks. Nation will not take up sword against nation, nor will they learn war anymore.” – Isaiah 2:4.

But now the UN has become a cesspool of competing blocs of nations that are not always concerned about justice but more interested in pushing narrow and hostile agendas and few, if any, delegates bother to read that inscription on the wall of the United Nations. Instead the world body has become a veritable Temple of Hypocrisy served by a priesthood of cynics and rogues.

And so much of humanity is becoming more and more inured to the present day horrors that increasingly proliferate around the globe and whose ghastly images are daily flashed on our television screens.

Civilians are routinely butchered, and genocide in South Sudan continues as it does in Somalia and, in particular, throughout the ever violent Middle East. As I write, butchery on a grand scale is taking place throughout Syria, governed as it is by Bashar Assad; a scion of the minority Alawite tribe.

According to Ammar Abdulhamid, a member of the Free Syrian Army, which is one of the rebel groups battling the regime, Bashar Assad’s strategy is to create a de facto partition of Syria. This is, he says, taking place with the ethnic cleansing of factions and populations deemed hostile to the regime.

Syria may degenerate into dozens of fiefdoms, each one at its neighbor’s throat, or an Alawite state will emerge along Syria’s coastline, incorporating other areas of the country. This state, if it emerged, would incorporate the strategic city of Homs, which straddles all the main Syrian highways and communication routes.

Of immense concern should be Assad’s warehouses in which are stored Syria’s weapons of mass destruction consisting of thousands of missiles tipped with Sarin and Mustard gas and God knows what other hellish ingredients.

In the present internecine conflict that is tearing Syria apart, these stored missiles – some already in silos – may well fall into the hands of a host of Islamic terrorist groups including Al Qaida and the Muslim Brotherhood – all fighting inside the country. If they do, a Pandora’s Box will open and the entire world will lurch yet further into a nightmare scenario to awful to contemplate.

And behind the ethnic cleansing, the massacres, and the butchery of thousands of civilians, lies the dread hand of Iran, with its fanatical Mullahocracy and its evil clown president, Mahmoud Ahmadinejad, ever spinning their web of terror and fear.

Since 1979, when Americans during the failed Carter presidency were taken hostage at our embassy in Teheran, Iran has been involved in anti-American activities including complicity in the 9/11 atrocities.

Iran has produced the infamous IEDs provided to Iraqi insurgents that have killed hundreds of U.S. troops and the Iranian regime has directly supported terrorism throughout the Middle East and beyond. The United States has ample cause to target the mullahs.

But thanks to the Obama Administration’s recent release of vital security information in the New York Times, our own brave agents in the field have been criminally exposed to the Iranian enemy. This leak was done, according to many, in order to boost Obama’s re-election campaign. If so, it is beyond shocking.

The mullahs are now aware of where the Stuxnet worm cyber-attack, which so effectively delayed the Iranian nuclear weapons program, came from. It is a no brainer that they will retaliate against us.

There is no way of knowing how they will respond or when it may take place. But we know that the leak to the Times by those within the Administration makes it harder and more dangerous to do what is necessary to thwart Iran’s hegemonic ambitions and rush to acquire nuclear weapons: As Lee Smith from the Weekly Standard recently opined. “Iran is the problem.”

Meanwhile the president’s inaction and dithering with respect to Syria is allowing the Russians and Iranians to intervene more and more on the side of Bashar Assad and his military.

The Interfax news agency announced recently that two Russian navy ships are sailing to Syria, ostensibly to protect Russian citizens and its naval base there. They will be visiting Russia’s last foothold and base in the Mediterranean; the Syrian seaport of Tartus.

This would be the first time since the current uprising in Syria began that Russia is sending extra troops to its Syrian base. There is some speculation that they may also be on hand to rescue Assad and his family, if necessary, by flying them out of the country.

Meanwhile Russia is also providing sophisticated anti-aircraft weapons that could shoot down NATO planes if they are ever used in the conflict.

Some believe with Senator John McCain that similar steps should be employed in Syria, as occurred in Bosnia, Kosovo and Libya, to support the Free Syrian Army and the other groups fighting the Assad regime and its huge and powerful military.

Russia may well have decided, therefore, to pre-empt such a move by arming Syria with weapons capable of shooting down any such U.S and other aircraft flying under the NATO shield.

Thus Syria has received the BUK-M2, which is a medium-range Russian missile system capable of hitting enemy aircraft and cruise missiles at ranges of up to 50 kilometers and at an altitude of up to 25 kilometers.

According to the Associated Press, it is a sophisticated weapon capable of inflicting heavy losses on enemy aircraft if Syria comes under attack. Senator McCain and others who agree with him must, under the circumstances, realize that time is not on our side. This makes Obama’s apparent paralysis during his election campaign even more frustrating.

Apart from one of the largest arsenals of chemical weapons in the world, Syria has an enormous stockpile of missiles, aircraft, tanks and every conceivable weapons system – all supplied by Russia.

But it is worth repeating that Al-Qaida terrorists and jihadists are infiltrating into Syria and the vast Syrian supply of weapons of mass destruction may fall into the hands of any number of these Islamic terror gangs.

And if Assad is pushed to the wall, he has already threatened that he will strike out in unpredictable ways, which may well include unleashing the thousands of missiles in his own stockpiles at neighboring Israel. Naked and unprovoked aggression against Israel always wins support in the Arab and Muslim world.

Iran may well order its surrogate, Hezbollah, to also fire their thousands of rockets (estimated at 60,000) from Lebanon at the Jewish state. The resulting bloody conflict will likely spill out of control and envelop the entire region – a dark and frightful place where the one thing that unites the warring Arab and Muslim world is the fanatical desire to destroy the Jewish state and exterminate another six million Jews.

Adding to the sidelining of the United States is a new report which, according to the semi-official Iranian Fars News Agency, claims that Russia and China, along with Iran, plan to hold a military exercise in Syria with 90,000 personnel, 400 aircraft and 900 tanks taking part.

And according to Debka Intelligence Report, “Russia and China are prepared to parade their unabashed partnership with the Iranian and Syrian armies for the shared purpose of obstructing US-European-Arab military intervention in Syria. No date was attached to the report but the exercise may possibly take place before the end of June, 2012.”

Thanks to the amateur foreign and defense policies of President Obama, the United States will have little control, if any, of the situation.

“Never Again” is becoming even more hollow and worthless.

Victor Sharpe is a prolific freelance writer and author of the trilogy, Politicide: The attempted murder of the Jewish state.