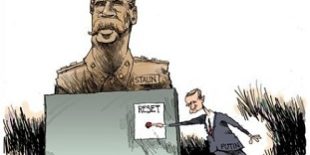 Later this month, Russian president Vladimir Putin is scheduled to make a state visit to Israel.  It will be Putin’s second visit since 2005 (Obama should take notice).  Putin, who began his third term as President of Russia last month, served as Prime Minister in the intervening years.  In Israel, Putin will be meeting with his counterpart Shimon Peres, and Prime Minister Benjamin Netanyahu.

Putin’s trip comes amidst the controversial role Russia is playing in the civil war currently unfolding in Syria.  His support for the Assad regime diplomatically and militarily, in providing it with attack helicopters and other heavy arms that the regime has used to butcher civilians, and Russia’s obstruction of any attempt in the UN to condemn the Syrian regime, is antagonizing Western powers.  Syria, however, remains Russia’s only ally in the Middle East and provides Moscow with a naval base in the Mediterranean.  And Russia, like Israel and some other Western powers, are concerned that an Islamist regime will replace Assad.

Putin’s current thinking is that the U.S. and its Western allies will not act militarily against the Assad regime, and that the regime will eventually quell the rebellion.  Russia is therefore unwilling to risk its comfortable position with the Assad regime (with Syria as a major arms purchaser and Russian banks holding more than $6B in Syrian assets) unless it appears that the Free Syrian Army has the upper hand in the apparent civil war.   Russia, however, finds itself on the opposite side of Israel and the U.S. on the issue of Iran’s nuclear program and has undermined Western attempts to force Iran to give up its nuclear weapons program.

Russia built/sold Iran the nuclear facility known as Bushehr.  Russia’s relations with Iran are characterized by the rivalry between a pro-Western group, which advocates the benefits of cooperation with the U.S. as opposed to questionable partners such as China, Iran, and other unsavory third world states, and the old Russian Defense Industrial Complex (OPK), which promotes the traditional strategic and economic ties with China, India, Iran, Syria, and North Korea.

Iran’s Press TV reported on June 8, 2012 that the “Secretary General of Iran’s Supreme Council Saeed Jalili says the promotion of strategic relations between Tehran and Moscow will serve the interests of the regional nations.”  Jalili added, “The strategic cooperation between Tehran and Moscow has the potential to align the balance of power with the interests of regional nations.  Iran-Russia constructive interaction will result in regional stability and security.”  These comments were made during a meeting between Jalili and the Secretary of the Russian Security Council Nikolai Patrushev.

At the same time, Russia appears to have shelved its plans to sell Iran S-300 ground-to-air missiles on the grounds that such a sale is forbidden under the UN sanctions ruling.  Back on July 24, 2010, a BBC report suggested that Saudi Arabia had offered to buy $2 billion worth of Russian weapons on condition that Russia does not sell Iran the S-300 missiles and would stop supporting Iran at the UN.   While Russia is a major supplier of arms and nuclear technologies to Arab nations and Iran, it has a growing security relationship with Israel which includes the purchasing by the Russian military of Israeli-made spy drones or unmanned aerial vehicles (UAVs).

One of the stated reasons for Putin’s visit is to attend the unveiling ceremony of a memorial in Netanya in honor of the Red Army soldiers killed during World War Two.

Commenting on the occasion of the 20-year renewal of relations with Russia, Israel’s Foreign Minister Avigdor Liberman said, “Renewal of diplomatic relations between Israel and Russia twenty years ago was an important historic event that impacted on the connection between the countries and peoples and on Israel’s history, bringing more than a million new immigrants from the former countries of the USSR to Israel.  Since then, the relations between the states have expanded, and I am convinced that cooperation in all areas will only grow stronger.”

The Moldova native Israeli Foreign Minister Avigdor Liberman and Russian President Vladimir Putin share a common language – Russian.  This no doubt has helped forge a closer relationship between the two countries.  Ironically, while the U.S. is Israel’s closest ally and friend, U.S. President Barack Obama is not considered friendly by most Israelis; conversely, Russia, while not considered a friendly state, its president, Vladimir Putin, is regarded by many in Israel as a friend.   Visiting Russia during the controversial legislative (Duma) elections last December, Avigdor Liberman stated that the “elections were absolutely fair, free and democratic.”  Taken as an endorsement of Putin, this statement cemented the warm relationship between the two.

The relationship between the two states is founded on the realization that over a million Israeli Jews (and non-Jews) from the former Soviet Union live in Israel and have kept their traditions and heritage alive during the past two decades.  The Russian-speaking community in Israel holds a wide variety of positions of influence in Israeli society.  They have integrated well into Israeli economic, scientific and cultural life, and hence form a vital bridge between the two states by promoting closer ties.

The bilateral relations, however, are secondary to the wider strategic interests of the two states in the Middle East region.  Radical Islam, as a by-product of the “Arab Spring” poses a threat to both Russia and Israel.

Russia is concerned that the “Arab Spring” may influence and radicalize its own Muslim population.  Israel is challenged by the victories of the Muslim Brotherhood in several Arab states and especially in Egypt.  And Jordan as well might succumb to the Muslim Brotherhood triumph.  These realities, coupled with the pro-Islamist policies of Turkey’s Prime Minister Erdogan, present another set of challenges for both Russia and Israel.   In light of these circumstances in the Middle East, Russia considers Israel a potential asset in its efforts to deal with its economic, political, strategic, and security challenges.  Israel is regarded as a strong regional power that might help Russia regain parity with the U.S. in the region.  For Israel, moving Russia away from its enemies – Iran, and Syria – would greatly enhance Israel’s security.

Putin’s visit to Israel comes amid a realignment of forces in the Middle East, with Russia willing to reassess its foreign policy in order to meet emerging political challenges.  Under these circumstances, it is reasonable to assume that Russia is willing to strengthen cooperation with Israel in a bid to promote its national interests.  Considering the threat posed to both countries by the rise of Islamism, a Russian-Israeli partnership has the potential to benefit both countries.  Moreover, in view of the rapidly changing balance of power in the Middle East, this alliance could potentially stabilize an unstable region during a time of great uncertainty.

Prime Minister Netanyahu will no doubt be weighing the possibility of a second Obama term as he meets with Putin, and that prospect alone would call for a more solid relationship with Russia.