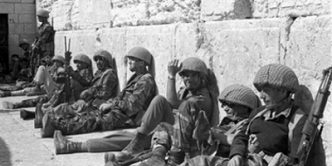 Israel’s miraculous victory but how leaders have betrayed its patrimony and heartland.

Forty-five years ago, on June 5, 1967, the world was writing Israel’s obituary. The armies of Egypt, Jordan, Syria, Lebanon, Iraq, Saudi Arabia, Sudan along with military contingents from many other Arab and Muslim regimes were all poised at tiny Israel’s vulnerable borders ready to annihilate the Jewish state. The odds appeared immensely stacked against Israel and the likelihood of any outside military support, even from the United States, seemed remote. Israel stood alone.

The Arab Muslim street was shrieking blood curdling threats of mass extermination for all Israelis, young and old, and the Arab leaders were falling over themselves to see who could utter the most hideous promise of massacre and slaughter. The Muslim Arab cry, Itbah Al-Yahud, an Arabic phrase meaning “Slaughter the Jews” was spewing from every Arab regime’s controlled radio and television station.

Khaybar ya Yahod, another Arabic battle cry, referring to a seventh-century attack by Islam’s prophet, Mohammed, and his followers against the Jewish community in Khaybar, in present day Saudi Arabia, was also being shouted by huge Arab mobs. Mohammed’s surprise attack, breaking a 10 year treaty, resulted in the forced expulsion  of all the Jewish men, women and children. In 627 AD, Mohammad also attacked the Jewish Bani Quraysh tribe, beheading many of the men and boys and enslaving the women and young children.

For many years Arab terrorists from Egyptian occupied Gaza and terrorists from the Jordanian occupied West Bank (which is the biblical and ancestral Jewish heartland) had been mounting cross-border attacks into Israel killing civilians, including many children. And remember, this was long before the so-called Israeli “occupation,” which the Arab world and its supporters always claim as the sole reason for Arab aggression against the reconstituted Jewish state.

Beginning in late May and early June, 1967, Nasser sent 80,000 Egyptian troops and 900 tanks across the Sinai Desert to attack Israel with air cover provided by 400 jet aircraft. Soviet made Syrian guns and artillery on the Syrian occupied Golan Heights were already pounding Israeli farmers and villagers in the valley below and firing on Israeli fishermen in the Sea of Galilee.

At the same time, indiscriminate shelling of Jerusalem by the Arab Legion from the Jordanian occupied West Bank had killed scores of Israeli civilians and wounded 1,000 despite pleas from Israel to Jordan to stay out of the war. Meanwhile, disgracefully succumbing to Nasser’s demands, the United Nation’s buffer force in Sinai that had been in place since the earlier 1956 One Hundred Hour’s War hastily left, even as Israel pleaded with Secretary General U Thant to honor the UN mandate to keep the peace.

Egypt was also blockading Israeli shipping in the Straits of Tiran leading to the Red Sea and Israeli ships were also prohibited from using the Suez Canal. This was strangling Israel’s economy. Faced with all this, Israel struck back and won a stunning victory.

In a surprise move, the Israeli Air Force attacked while the Egyptian pilots were having breakfast and destroyed all 400 Egyptian planes on the ground. The Israeli armored and infantry units, though outnumbered, rolled up the huge Egyptian army, forcing it back to the Suez Canal; drove the Syrian forces from the Golan Heights and reunited divided Jerusalem, liberating all the Jewish holy places in the Old City, which the Jordanians had desecrated and destroyed.

The Jordanians had taken the ancient Jewish gravestones on the Mount of Olives and used them as latrines for the Arab Legion. At the same time, some 58 synagogues, some dating back centuries, had been blown up and their ruins used as stables for donkeys.

With Jerusalem’s liberation and unification, all the holy places were now open to worshippers of all faiths and the desecration by the Muslim occupiers repaired and sanctified. The Via Dolorosa, which under the Jordanians had been an open sewer, now became a clean pathway on which Christian pilgrims could walk safely.

Many people believe the astonishing Israeli victory was a miracle. I remember listening in England to Michael Elkins, the BBC reporter in Israel at the time, who broke the startling news of the Israeli victories on all three fronts; the Egyptian, the Syrian and the Jordanian. But equally, many people also thought he was exaggerating Israel’s total defeat of her enemies, preferring almost to the end of the Six Day War to continue believing the strident but false Arab boastings that Israel was being destroyed.

Almost prophetically, an earlier Israeli Prime Minister, David Ben-Gurion, had stated that, “In Israel, in order to be a realist, you must believe in miracles.”

Years later, on February 5, 1996, Britain’s conservative Prime Minister, Margaret Thatcher, referring to united Jerusalem, stated: “We have to remember that the Jewish people never lost their faith in the face of all the persecution and as a result have come to have their own promised land returned and have Jerusalem as a capital city again.”

But, as Ruth King from Americans for a Safe Israel (AFSI) wrote in her excellent blog, www.RuthfullyYours.com “…in order to seek peace with implacable Arab enemies, Israel has consecutively dismembered its patrimony and heartland.”

She was referring to the absurd and suicidal notion of “land for peace” in which Israel gives away its historic land but never receives peace. Israel has gained naught from such overtures to the Arab and Muslim world except more terror from an implacable foe. Even immediately after the June, 1967 victory, Moshe Dayan gave away to the Muslim Waqf the newly liberated Temple Mount – a tragic error that haunts the Jewish state to this day.

Indeed, as anyone who understands the Arab mentality knows, such offers of reconciliation have been seen not as peaceful overtures but rather as abject signs of weakness and lack of resolve, merely emboldening the jihadists and encouraging ever more relentless Arab terror and aggression. The old saying, “give an inch and they will take a mile” comes to mind.

Meanwhile the Israeli hard Left Peace Now organization continues its destructive campaign of vilifying the thousands of Jewish families who live in Judea and Samaria – a campaign  funded in large part by the European Union, which would make the biblical Jewish heartland judenrein.

The dirty little secret, that astonishingly still evades so many Israeli leaders, is that in the world of Islam, wherever the Muslim foot has once trod triumphal, that, forever, remains Islamic land.  If it is lost, then it is incumbent as a religious duty upon all Muslims to wage ceaseless war until it is recovered. Thus Peace Now cannot ever find a partner within the Islamic world, for if one ever dared come into existence it would be given short thrift by the Muslim faithful.

And for the same reason, there can never be peace from those Arabs who call themselves Palestinians with the reborn Jewish state, regardless of the breathtakingly generous offers of land given to them by successive Israeli leaders.

Nor, for that matter, will the Muslim world ever give up the dream of reconquering all those once Muslim occupied lands lost in Spain, Portugal, Sicily, parts of France, Greece, the Balkans, southern Russia – even up to the gates of Vienna.

Victor Sharpe is a prolific freelance writer and author of several books including the acclaimed trilogy, Politicide: The attempted murder of the Jewish state.