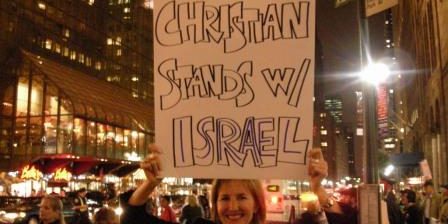 Tens of thousands of churches have a committed belief in the importance of standing with Israel and blessing the Jewish people. The verse most often referred to as their biblical mandate is Genesis 12:3 in which God tells Abraham “I will bless those who bless you and I will curse those who curse you and in you all the families of the earth will be blessed.”

Since the birth of the State of Israel in 1948 the theological error known as Replacement Theology has begun to decline and increasing is a theology of Christian Zionism that understands the importance of God’s everlasting covenant with Abraham and the nation he would birth.

However, just as the term “Zionism” has been turned into a negative word by Israel’s enemies, so “Christian Zionism” is under attack and often misrepresented in the media and in some public discourse. For this reason, the ICEJ’s articles and monographs defining and clarifying the beliefs of Christian supporters of Israel and placing their “love for Israel” within its proper biblical context are proving invaluable.

” Zionism, the national movement for the return of the Jewish people to their homeland and the resumption of Jewish sovereignty in the Land of Israel, advocated, from its inception, tangible as well as spiritual aims. Jews of all persuasions, left and right, religious and secular, joined to form the Zionist movement and worked together toward these goals. Disagreements led to rifts, but ultimately, the common goal of a Jewish state in its ancient homeland was attained. The term “Zionism” was coined in 1890 by Nathan Birnbaum.” (Jewish Virtual Library).

For this very reason, a myriad of answers may be given by a Christian when questioned about their support of Israel. Answers can include political, historical, and/or religious reasons.

The actual theology of Christian Zionism, also known as Biblical Zionism, supports the right of the Jewish people to return to their homeland on scriptural grounds. The biblical foundation for Christian Zionism is found in God’s Covenant with Abraham. It was in this covenant that God chose Abraham to birth a nation through which He could redeem the world, and to do this He bequeathed them a land on which to exist as this chosen nation.

Christian Zionism is confirmed throughout the Hebrew Scriptures. The major and minor prophets consistently confirmed this national calling on Israel, promised her future restoration to the land after a period of exile, and spoke of her spiritual renewal and redemption bringing light to the world.

Christian Zionism differs with Replacement Theology which teaches that the special relationship that Israel had with her God in terms of her national destiny and her national homeland has been lost because of her rejection of Jesus as Messiah, and therefore the Church has become the new Israel. The Church has then inherited all the blessings promised to Israel but the judgments and curses still conveniently remain over the Jewish people.

Instead, Christian Zionism teaches from the scriptures that God’s covenant with Abraham is still valid today. There remains a national destiny over the Jewish people and her national homeland is her everlasting possession in fulfillment of God’s plans and purposes for her. The New Testament scriptures not only affirm the Abrahamic covenant, but they confirm the historical mission of Israel and that Israel’s gifts and calling are irrevocable.

Thus, Christian Zionism is not based on prophecy or end-time events. Most Christian Zionists would agree, however, that Israel’s reemergence on the world’s scene, in fulfillment of God’s promises to her, indicate that other biblically-predicted events will follow.