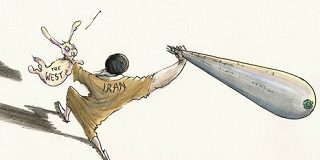 As a professional historian, I normally do not place much stock in historical analogies. They usually obscure and confuse more than they clarify.

But in the case of the recent P5 + 1 talks in Baghdad that will resume in Moscow later this month — when the five permanent members of the UN Security Council, plus Germany, will try again to negotiate an agreement with Iran that will prevent its nuclear program being used to develop nuclear weapons — an analogy comes to mind that suggests what the results of these negotiations are likely to be.

The analogy is with the Munich conference at the end of September 1938, at which Nazi Germany, Italy, France, and Great Britain forced Czechoslovakia to cede to Germany the so-called Sudetenland, in the western part of the country, where some (but by no means all) of the three million ethnic Germans living there were demanding, in the name of self-determination, that it become part of Germany.

Hitler favored this because it made easier the destruction of Czechoslovakia, which in turn would facilitate the acquisition of lebensraum (living space) in Russia for the Aryan race. Additionally, the Czech government was required by the Munich agreement to cede to Poland all parts of Czechoslovakia where the population was more than 50% Polish, and to Hungary all territory where the population was more than 50% Magyar.

THAT THE agreement was negotiated by the four heads of state — Hitler, Mussolini, Edouard Daladier for France, and Neville Chamberlain, the British Prime Minister — rather than by their foreign ministers underscored its significance. Hitler had scheduled an invasion of Czechoslovakia for October 1 – a fact known to the British and the French — if it did not meet the Sudeten Germans’ demand, and for that reason the Munich agreement seemed to preclude a European war. In reality it merely postponed it.

Conspicuously absent from the conference were the United States, the Soviet Union, and Czechoslovakia itself, whose vital national interests the participants at Munich did not consider legitimate enough for the Czechs to be present to protect. The closest any representatives of the Czech government got to the negotiating table was a room adjacent to it, where two low level functionaries sat in silence, forbidden to participate in the negotiations.

For good reason Munich has become code for the appeasement of regimes that cannot be appeased because there is no limit to the demands they will make.

The obvious analogue of Czechoslovakia in the P5 + 1 talks is Israel. Like Czechoslovakia in 1938, it is the only country whose existence is deemed illegitimate by a participant in the talks, namely Iran. The Iranian government has repeatedly, and with increasing vehemence, threatened to annihilate Israel — most recently by Major General Hassan Firouzabadi in a speech in Tehran this past Sunday. Nonetheless, Israel is not represented at the talks; there are not even any Israelis in an adjacent room. And like Nazi Germany in 1938, Iran will not be deterred by any agreement it signs from its longstanding intention of acquiring nuclear weapons for the purpose of annihilating Israel and dominating the entire Middle East. Like Hitler, who six months after Munich ordered German troops to occupy the rump that remained of Czechoslovakia, the Iranians several times have agreed to limits on their actions, for example on the percentage to which they will enrich low-grade uranium, only to ignore these limits when it became possible politically to do so.

By consenting to America’s participation in these talks, President Obama is acquiescing in a process that can only jeopardize the lives of the six million Jews (and the one million Arabs) who live in Israel. That he is doing so while claiming “to have Israel’s back” is an act of cynical calculation worthy of the appeasers at Munich.

The writer is a Professor of History at Central Connecticut State University and the author, most recently, of Meeting the Demands of Reason: The Life and Thought of Andrei Sakharov.