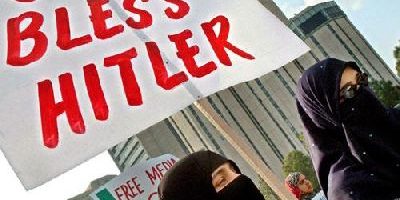 Future generations will wonder how an organization such as the PLO, one of the worst ideological criminals of the twentieth century along with Al Qaeda, Pol Pot, the SS and the Iranian ayatollahs, has been able, in spite of its proudly proclaimed anti-Semithic barbarism, to achiev world-wide acclaim and support.

Take the reports released in the last week by the heroic Palestinian Media Watch, the monitor group founded by Itamar Marcus and which should be honored with a Nobel Peace Prize.

In a PA TV’s children’s program, a young girl says that Christians and Jews are “inferior” to Muslims, while the official PA daily, Al-Hayat Al-Jadida, was proclaiming Israel’s destruction: “We remember you, all of Palestine. You are present within us… until we return to you, oh Haifa, Acre, and Jaffa, all of historical Palestine… and all the temporary ones (Israelis) will go away… May their (Israeli) independence collapse, and may Palestine come back to life”.

Translation: We would like to turn the Mediterranean Sea red with Jewish blood.

In 1981, the late Jewish philosopher Emil Fackenheim, who has been hailed as a leftist hero, penned an opinion in the Globe and Mail: “The PLO covenant can be amended only by a two-thirds majority. No attempt has ever been made to amend it. In assassinating dissidents within its own ranks, the PLO does no more than abide by the document to which it is committed. If this is what it does to its own people, one can imagine what it would do to Israelis, if it were ever given the opportunity by weakness on the part of Israel or folly on the part of the world”.

Would the PLO sue for peace if more territories were returned by Israel?

The answer lies in the Palestinian Manifest of 1968, which contains incredible similarities to the Nazi Charter written in 1920.

The PLO covenant is not the manifesto of a lunatic faction, it’s the mainstream essence of the Palestinian movement (Hamas’ manifesto suggests an even darker hell).

Israel is becoming a country of “pragmatists”, and for them ideology matters very little. But ideology is the most important key to understanding the roots of conflicts.

30 out of the 33 articles in the PLO Covenant directly or indirectly call for the use of violence against the Jews, as in Article 9, which declares: “Armed struggle is the only way to liberate Palestine”.

The document encompasses moral, utilitarian, legal and military arguments, all converging into a negation of the existence of the State of Israel in any form or size. The covenant rejects the idea that Jews have any “historical or religious ties” to the land, since “Judaism, being a religion, is not an independent nationality”.

If the PLO charter says that “Palestine” is an “indivisibile” part of the Arab world, the Nazi manifesto proclaimed the union of “all Germans” in Europe.

If the Palestinian Arabs declare the Balfour Declaration null and void, the Nazis said the same of the Versailles Treaty.

If the PLO Covenant is defined as “not be amended” (it was never amended even after Oslo), the Nazi Charter is declared to be “unalterable”.

PLO’s Article Six declares: “The Jews, who had normally resided in Palestine until the beginning of the Zionist invasion (usually dated as the mid-19th century) will be considered Palestinians”. In other words, 98 per cent of the existing Israeli Jewish population must be banished.

Like Hitlerism, Palestinianism is not a national identity, it’s an ideological construct developed as a criminal agenda since the PLO was created in 1964.

The Palestinian proto-Nazi manifesto claims that the“Palestinian personality” is an “innate, persistent characteristic that does not disappear . . . and is transferred from fathers to sons” (No. 4).

And what if all Palestinians had emigrated, or had become refugees from the land? They would still belong to “Palestine” along with their male descendants. Forever. This is like the Nazi “Drang Nach Osten” and “Blut und Erde”.

Like the Nazis tried to build an Aryan “Lebensraum” in Europe’s rubble, the Palestinians dream of an Arab Lebensraum in the ruins of Israel.
Palestinianism is a primitive ideology that smacks of the medieval-style anti-Semithic blood libels. It sees the Jews as “dispossessing”and “polluting” an “archetypical” Palestine.

It’s a kind of eugenist construct which sees “native species” originate in a certain place and declares that is where they “belong”.

Hence, Israel’s “colonization” threatens the “original” Arab environment. They convinced the world of this horrible lie. That’s why every day we read reports accusing Israel of “warfare ecology”, “deforestation”, “erosion of agricultural lands”, “settlers’ cementification”, “architecture of occupation” or “expropriation” of Arab land.

Like the Nazis tried to build an Aryan “Lebensraum” in Europe’s rubble, the Palestinians dream of an Arab Lebensraum in the ruins of Israel.