IAF strikes in Gaza after rocket attacks on Israel 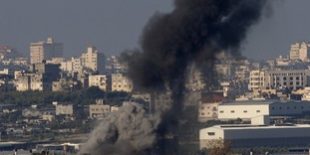 IAF aircraft struck a weapons-manufacturing site and a terror tunnel in northern Gaza on Sunday night, according to an IDF statement.

The statement noted that direct hits at the targets were identified. All Israeli planes returned safely to their base.

The attack came after terrorists in Hamas-controlled Gaza fired a Qassam rocket at southern Israel late Sunday night. The rocket exploded in an open area in the Eshkol Regional Council. There were no physical injuries or damage.

In an earlier attack on Sunday evening, terrorists from Gaza launched a Qassam rocket at southern Israel. This rocket, too, exploded in an open area of the Eshkol Regional Council. No physical injuries or damage were reported.

“The IDF will not tolerate any attempt to harm Israeli citizens and IDF soldiers and will continue to act against anyone who uses terror against Israel,” said the IDF statement, which added that the “the terrorist organization Hamas” is responsible for the deadly incident.

On Saturday night, IAF aircraft struck three weapons manufacturing sites in central Gaza, as well as two terror tunnels, one in northern Gaza and one in the south.

According to a statement by the IDF Spokesperson’s Unit, direct hits at the targets were identified. All Israeli planes returned safely to their base.

Saturday night’s attack came in response to the shootout between IDF troops and a Gaza terrorist on Friday morning. 21-year-old Golani Brigade soldier Netanel Moshiashvili was killed in the incident.

The incident occurred as the terrorist tried to infiltrate the western Negev from Gaza the predawn hours of Friday morning.

According to a preliminary investigation, the terrorist took advantage of fog around 4:00 a.m. to go through a hole he cut in the security fence near the Kissufim crossing. A Golani unit responded to the scene and identified the terrorist who opened fire at the soldiers, killing one. Artillery soldiers fired back, killing the terrorist.

The quiet in the south has mostly been maintained since Egypt brokered a ceasefire between the sides. However, a ‘ceasefire’ for the terrorist groups mean that they do not fire barrages of rockets, but periodically send a reminder to Israelis that they have the ability to disrupt their lives.