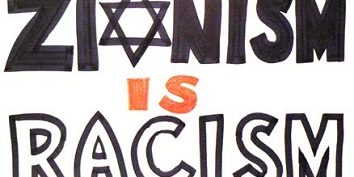 In the wake of the festival of Shavuot, when Jews have been celebrating the giving of the Ten Commandments to Moses on Mount Sinai from where he presented them to the Jewish people camped at its foot, I have been brooding over the fact that Zionism has become a dirty word in Britain and the west.

For many in these societies, Zionism has now become equated with racism. This group libel, once regarded with revulsion by decent people when the Soviet-Arab axis got the UN to endorse it in 1975, has now become the prism through which the BBC, academia, the artistic and theatrical world and much of the rest of the cultural establishment now frame all references to Israel.

This helps explain the attempted boycott of the Israeli theatre company Habima, playing Shakespeare’s Merchant of Venice at London’s Globe theatre this evening in conditions of the tightest security (apparently the expected interruptions by bigots have so far been relatively minor). The profound malice and ignorance behind such reflexive demonisation of Israel are rendered all the more hallucinatory by the sanctimonious and unchallenged assumption of the moral high ground which these idiots believe they occupy.

This is as grotesque as it is terrifying. Zionism is no more nor less than the self-determination of the Jewish people — as a people, and not just as adherents of the Jewish religion. Jews are in fact the only people – as a people — for whom Israel (ancient Judea and Samaria) was ever their national homeland. Those who deny Zionism thus deny Jewish peoplehood and the fundamental right of Jews to live as a people in their own ancestral homeland, Israel.

Unique in the world, Jews are both a people and adherents of a religion. Intrinsic to and inseparable from the religion of Judaism is the land of Israel; more specifically, the centrality of and longing for Jerusalem and its Temple. Deny that centrality and you rip the heart and soul out of Judaism. Those who deny the right of the Jews to Israel and Jerusalem deny the right of the Jews to their own religion.

Judaism is like a stool supported on three legs – the nation, the religion and the land. Saw off any of these legs and the stool collapses. Does this mean that all Jews are Zionists? Of course not, no more than it means that all Jews are religious. But just as the hatred of Jews on theological grounds has always threatened the lives and safety of all Jews including those who are not religious, so the anti-Zionist hatred of Jewish self-determination is a form of bigotry which threatens the lives and safety of all Jews, whether or not they are Zionists. And the fact that there are some anti-Zionist Jews who themselves hate the expression of Jewish self-determination in the form of the State of Israel is a manifestation of that same self-same bigotry no less for being such a tragically twisted example.

The anti-Zionist madness of our time is thus far more pernicious even than hatred of Israel, pathologically obsessive and malevolent as that is in itself. Bad enough that for so many people in Britain and the west, Israel has been successfully demonised as a pariah state on the basis of a unique systematic campaign of falsehoods, distortions and libels about its history and behaviour, untruths which have nevertheless become the unchallenged basis for public discussion.

But far worse even than this is the assumption underlying this lazy defamation, that Zionism is a creed that is itself a particularly aggressive kind of racism or colonialism. This vicious prejudice has turned truth, reason and decency inside out. The right of the Jews to their own historic national homeland has been recast, entirely falsely, as a usurpation of the ‘right’ to that land of ‘Palestinians’ – who never actually existed as a discrete people in the first place. Those Jews who are Zionists now find themselves as a result cast as racists and social pariahs – merely for asserting the right of the Jewish people to self-determination in their own historic homeland.

Those who are driven by a vicious and bigoted hatred have thus been allowed to cast the victims of their hatred as themselves hateful people. Zionist Jews are thus defamed and victimised many times over – and by those who have the gall to claim the moral high ground in doing so, from luvvies Emma Thompson and Ken Loach to the boycotters and thugs who harass and bully Zionist Jews on campus.

This is a truly chilling situation, reminiscent of the mass brainwashing and hijacking of thought that took place in the Soviet Union – not surprising when you consider the Soviet-Arab axis that back in the seventies set out to destroy Israel by capturing and subverting the western mind. In practical terms, it means that by definition it is not possible to persuade people what has actually occurred and what the true facts are, since such propositions will be dismissed out of hand — on the basis that everyone knows that the lies about Israel are actually the unchallengeable truth.

But just as in the former Soviet Union, there are plenty of decent, rational people who do understand very well what is happening here, and its broader and lethal implications for the safety of the entire western world. For those people and others who have yet to be persuaded — not to mention the duty to record this infamy into the memory of the world — the truth behind this terrible departure from reason and decency over Israel and Zionism must continue to be publicly told.