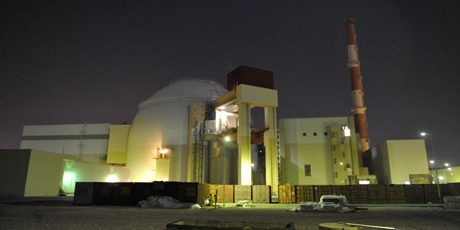 Iran is to build a new nuclear power plant, alongside its sole existing one in the southern city of Bushehr, by early 2014, state television reported on Sunday, quoting the head of the country’s Atomic Energy Organisation.

“Iran will build a 1,000-megawatt nuclear power plant in Bushehr next year,” the television quoted Fereydoon Abbasi Davani as saying. He was referring to the Iranian calendar year running from March 2013 to March 2014.

The current Bushehr nuclear plant was started by German engineers in the 1970s, before Iran’s Islamic revolution, and was completed by Russia, which continues to help keeping it running and provides fuel for it.

In addition, Iran has a research reactor operating in Tehran that is used to make medical isotopes for patients with cancer and other illnesses.

A new Bushehr plant would boost electricity production in Iran, which has some of the world’s biggest reserves.

State television made its announcement in the wake of talks in Baghdad on Wednesday and Thursday between Iran and world powers that focused on Tehran’s controversial nuclear programme.

Those talks almost collapsed because of the very different positions held by the two sides, but agreement was finally reached to hold another round in Moscow on June 18-19.

Iran insists its nuclear programme is exclusively peaceful and aimed at producing energy and medical isotopes.

The world powers — the Britain, China, France, Germany, Russia and the United States — suspect the programme could include work towards developing a nuclear weapons capability, and they have backed UN Security Council resolutions calling on Iran to curb its activities.