The Messiah and Shavuot 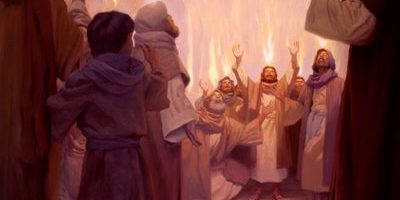 The holiday of Shavuot is upon us. It begins Thursday evening on May 28th  and ends the evening of May 30th.  If you haven’t heard of the Biblical holiday of Shavuot, that’s probably because you are more familiar with its Greek name: Pentecost.

On Shavuot, Jews celebrate the events that took place on Mount Sinai.  The Bible recounts that fifty days after the Hebrews were miraculously rescued from slavery in Egypt—a miracle marked on Passover—Moses returned to the same humble spot where God first spoke to his servant through the burning bush.

In Exodus 19, it says that when God descended on the mountain, thunder ripped through the sky and the ground shook.  A shofar blew a long blast. A dense cloud of smoke and fire surrounded the summit.  God instructed Moses that no one, not even the animals, were to touch the mountain. Disobedience equaled certain death.

Moses spent forty days on the mountain where he was given the Ten Commandments and the Torah.  God’s promise to the Israelites was that from that day forward if they obeyed Him fully and kept His covenant, they would be a “nation of priests.”

God’s promise was quickly put to the test.  When Moses came down from the mountain and saw that they had already resumed idol worship in his absence, he allowed the Levites to take up their swords.  3,000 were killed that day.

Fast forward 1300 years, give or take, and we come to the day of Pentecost.  Fifty days after Christ’s resurrection and just ten days after his ascension, the disciples journey to Jerusalem to celebrate Shavuot.  Shavuot was one of three times a year that the Hebrew people were required to worship in Jerusalem and make sacrifices at the Temple.

For these important feasts, Jerusalem would be filled to the max with worshippers from all over the world.  The Temple priests led the masses of people in song and prayer as they celebrated the giving of the Torah and marked the anniversary of their becoming a covenanted people.

But on that day, as God so mysteriously designed it, another covenant was born—not one that would supersede or replace the first covenant but expand it.  Acts 2 tells us that suddenly “a sound like the blowing of a violent wind came from heaven and filled the whole house where they were sitting. They saw what seemed to be tongues of fire that separated and came to rest on each of them. All of them were filled with the Holy Spirit and began to speak in other tongues as the Spirit enabled them.”

You know the rest of the story.  Witnesses assumed the disciples were drunk.  Peter corrected them in one of the more humorous lines in the Bible saying “these people are not drunk…it’s only nine in the morning!” From there Peter gives the sermon of his life, commissioning the crowds to repent and be baptized so they too would receive the Holy Spirit.  3,000 were added to their number that day.

The feasts and festivals of the Bible are replete with types and symbols that all perfectly point to the Messiah.  The divine connections between Shavuot and Pentecost are so especially obvious that it’s thrilling.

On Shavuot, Moses acted as the intercessor between God and his covenanted people.  Jesus had already intervened on behalf of the world.

At Sinai the fire descended only on the summit of the mountain. At Pentecost the fire came “to rest on each of them” individually.

On the first Shavuot, God established his covenant with the Hebrew people.  On Pentecost, a new covenant was made available to all who believed.

On Shavuot, the Holy Law was inscribed on stone by the finger of God.  At Pentecost, the Holy Spirit wrote the Law on their hearts.

At Mount Sinai, 3,000 were killed due to their disobedience.  In Jerusalem, 3,000 were granted eternal salvation in response to their faith.

On Shavuot, God declared the Israelis a “nation of priests.”  On Pentecost, believers became priests to all nations.

There you have it.  Distinction and then inclusion.  One covenant grafted into the first.  Death and now life.  Law and Spirit.

The Talmud describes Shavuot as the “wedding day” between God and the Jewish people.  Now, the Bride of Christ waits anxiously for the day when we will be united with our Bridegroom.

Mark your calendars for this special holiday of Shavuot. We are celebrating God’s revelation and the anniversaries of receiving that revelation at both Mount Sinai and in Jerusalem.  Let us use this feast to make a public commitment, just as the people of Israel did, that “we will do and we will listen.”

Shelley Neese is the author of The Copper Scroll Project and President of The Jerusalem Connection.