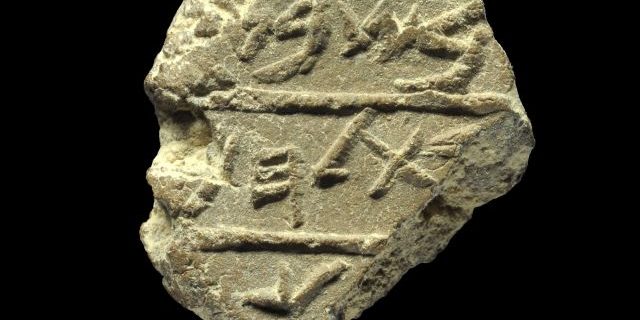 The artifact, called a “bulla,” is a piece of clay typically used as an official seal on a document or object. Impressed with the seal of the sender of the document, an intact “bulla” upon deliver was proof that a document had not been opened by anyone unauthorized to do so.

The “bulla” measuring around 1.5 cm was found during the sifting of soil removed from archaeological excavations the Israel Antiquities Authority is carrying out in the City of David.

The sifting is underwritten by the ‘Ir David Foundation’ in a project being conducted in the Emek Tzurim National Park.

Three lines of ancient Hebrew script appear on the artifact, including the words “Bat Lechem,” an ancient name for Bethlehem.

The artifact is of significant importance because that the area of biblical Bethlehem has yet to be archaeologically excavated, making the “bulla” the only proof of the city’s existence found outside of the bible. Elik Shukron, director of the excavation on behalf of the Israel Antiquities Authority, said “There’s a difference between reading the name of a city in the Bible, and reading that name written in ancient Hebrew script on an artifact.”

Shukron provided some historical background for the object. “It seems that in the seventh year of the reign of a king (it is unclear if the king referred to here is Hezekiah, Manasseh or Josiah), a shipment was dispatched from Bethlehem to the king in Jerusalem.The ‘bulla’ we found belongs to the group of ‘fiscal bullas’ – administrative ‘bullas’ used to seal tax shipments remitted to the taxation system of the Kingdom of Judah in the late eighth and seventh centuries BCE,” said Sukron.

“This is the first time the name Bethlehem appears outside the Bible, in an inscription from the First Temple period, which proves that Bethlehem was indeed a city in the Kingdom of Judah, and possibly also in earlier periods,” continued Shukron.

In the Bible Bethlehem is first mentioned in the verse “in Ephrath, which is Bethlehem”, and it was on the way there that Rachel died and it is where she was buried (Genesis 35:19; 48:7).

In a video accompanying the IAA’s announcement of the finding, Shukron says the bulla was evidence of tax being sent from Bethlehem to the king in Jerusalem.

“We know the name Bethlehem appears 41 times in the bible,” he said, adding that the unearthing of the bulla was a “one-time finding, you don’t excavate these kinds of things every day.”

“After many years of digging here, it’s the first time I found written evidence from the time of the First Temple that links Bethlehem to Jerusalem in an amazing way,” he said, adding that it was a very “exciting and important thing for this place .”