Hamas' Haniyeh: No future for Israel in Palestine' 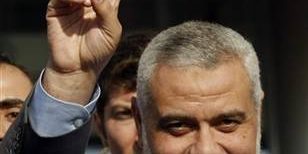 Hamas prime minister tells int’l delegation in Gaza, “we will not recognize Israel,” according to Hamas-affiliate Al-Resalah.

Hamas Prime Minister Ismail Haniyeh told an international pro-Palestinian delegation on Friday that there is no future for Israel “on the land of Palestine,” Gaza news portal Al-Resalah reported.

Haniyeh was speaking at a meeting in Gaza with delegates from several countries including Jordan, Egypt and Lebanon.

“We must live up to our motto.. .which says, we will not recognize Israel,” the Hamas-affiliate quoted him as saying.

He reportedly emphasized the importance of the right of return for Palestinian refugees, and lauded the “victory of the Palestinian hunger strikers.”

Israel and Palestinian security prisoners signed a deal to end a 28-day hunger strike by the inmates on Monday. According to the terms of the agreement, Palestinian prisoners committed to refrain from dealing with “activities against security” within prison confines. In exchange, they will receive benefits from the Prisons Service, including the end of separation from the general prison population, and family visits.

The Hamas prime minister also thanked the delegation for their efforts, “to alleviate the suffering of the Palestinian people in  the besieged Gaza Strip, and strengthen their steadfastness on their land.”