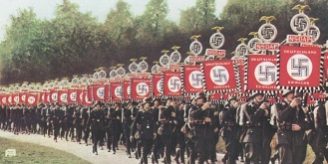 BY ISRAEL MINISTRY OF FOREIGN AFFAIRS—

Prime Minister Benjamin Netanyahu today (Wednesday), 9 May 2012, met with the leaders of Red Army veterans, on the occasion of Victory Day over Nazi Germany, and received from them a Red Army victory ribbon, one of the Red Army’s highest decorations for bravery.

Prime Minister Netanyahu said, “You symbolize Jewish heroism. I am moved every year when I meet with you. Without the victory over Nazi Germany, there would have been no State of Israel! I wish you health and long life.”

At a special meeting at the Knesset to mark the victory over Nazi Germany, Prime Minister Netanyahu said:

“We meet on this occasion, as we do every year. You asked me to wear this ribbon as a symbol of appreciation and solidarity. I do so and bow my head before the medals that glorify your uniforms. Every medal and every citation is a story of courageous – frequently bloody – battles and your great sacrifice, you and your comrades in arms, including the many who fell.

All in all, 1.5 million Jews fought against the Nazis in World War II, 500,000 in the ranks of the Red Army, and you saved humanity. All who fought against them did so but you made an additional contribution – in practice, you saved the Jewish people, and you ensured the Jewish future. We will not forget this. We know this and we want to give this special expression and, as far as I am concerned, do an historic justice in this regard.

In June, I hope no later than July, we will build a national memorial, an international memorial in effect, in cooperation with the Russian government, to commemorate the contribution of those who served in the Red Army, and there are many in the country, including among those present here today. We will finally give the historical documentation and appreciation demanded by this action which, in effect, ensured the 20th and 21st centuries and all that has occurred since the defeat of the Nazis.

I hope and am certain that you will all be there. Today, and every day, I would like you to know that I am proud of you. All MKs are proud of you. The Jewish people is proud of you and thanks you. You have our heartfelt gratitude. Continue to be healthy and continue to be proud of the great thing that you did. Thank you.”