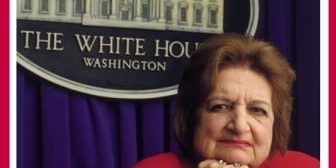 The Palestine Liberation Organization (PLO), headed by Palestinian President Mahmoud Abbas, honored former White House correspondent Helen Thomas in an award ceremony on Sunday. Maen Erekat, the PLO representative in Washington, hosted a dinner at his residence in an event that recognized Thomas for her “stand against the occupation” and “long career in the field of journalism, during which she defended the Palestinian position every step of the way.” In addition, Hanan Ashrawi, a member of the PLO’s Executive Committee, presented Thomas with an award on behalf of Abbas for “all of her actions supporting Palestine in the West.”

Of course, Helen Thomas is most remembered as the correspondent who was captured on video saying that Israelis should “get the hell out of Palestine” and “go home” to “Poland, Germany . . . and America and everywhere else.” She soon apologized, but later told an interviewer that she said “exactly what I thought.”

At the time, her remarks were praised by Hamas: “No doubt that Thomas Helen has told the truth that everybody in the world knows,” Hamas’s website read. “ Peace process will be successful, only when Israel get out of Arab Areas, Golan and occupied Palestine, then we can say that peace is happily achieved…”

Israel’s Ambassador to the U.S. Michael Oren responded by stating he is “appalled” by the ceremony. “This atrocious act is an indication of the Palestinian Authority’s failure to meet the basic requisites of peace,” he said.

According to reports “dozens of diplomats and journalists” attended the ceremony on Sunday. Their names have not been made public.

It’s not all that surprising that the PLO and Mahmoud Abbas would honor Helen Thomas; the Palestinian Authority under Abbas is known to name streets after Palestinian terrorists and incite hatred against Israel and Jewish people through TV programming and school lessons. But in honoring her, they remind why the Palestinian-Israeli peace process is at an impasse.