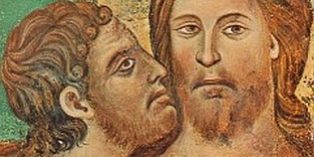 A few days ago I was talking with a spiritually sensitive Israeli who had been, in the past, in the very foreground of what became later known as the disastrous OSLO accords. He told me how he had truly believed – like so many – that these agreements reached with the arch murderer and terror chief Yasser Arafat would bring the so long hoped for peace. Later he realized – also like so many – that Oslo was a complete hoax. And he repented of his ardent support for this fatal delusion, sadly some still fanatically hold on to.

May many more have the honesty and courage to do the same, I pray.

Alas, as in the past, there are still those Israelis who find it far easier to cozy up to Israel’s enemies than to their own spirited Jewish brethren. I call it a ‘Judas Iscariot mentality.’ Cozying up to the Goyim in order to win favor from them has sadly been a recurrent occurrence throughout Jewish history. It happened during the early days of the Zionist endeavor, when their own fellow Jews betrayed Irgun members to the British, as Shmuel Katz elucidates in his biography of Jabotinsky:

Before the Jew declares that all the world is against us, that one of the greatest of the civilized nations is devoid of honesty, that God himself has turned away from us, before we say this, honesty demands that we say, “ashamnu, hagadnu and we shall now mend our ways and our methods!” If it should really transpire that cannot be achieved with Britain, it would be tragic. But in the depths of our beings we are convinced that even in that case our hope is not lost. We would find other ways. That question however has not arisen today…

With that naïve belief of those who foregathered many years ago in Basle – I was then a mere boy – with that same naïveté, I believe in the integrity of the world, in the power of a just cause. I believe that the great questions are decided by the power of moral pressure, and that the Jewish people is a tremendous power of moral pressure … Ani maamin . (Lone Wolf, a biography of Vladimir (Ze’ev) Jabotinsky by Shmuel Katz, Volume 2, pp. 1255-1256, Barricade Books, 1996.)

Even that great leader and founder of Zionism and the modern State of Israel, Dr. Theodor Herzl, wrote:

All Jews who are well off are against me. So that I have a right to become the greatest of all anti-Semites. I often think of Levysohn’s words. “Those whom you want to help will be the first to nail you painfully to the cross.” (The Labyrinth of Exile. A life of Theodor Herzl by Ernst Pavel, page 313)

It happened to the true and dedicated visionary of the revival of the Hebrew language – Ben Yehudah – betrayed by his fellow Jews to the Turkish authorities, who imprisoned him. It happened, yes, to the pure and wonderful Rabbi Yeshua – betrayed to the Romans. And so the list goes on. Do we need to relate again how many Jews, during the second world war were willing to cooperate, even against their own people, with the Nazis?

And we see it today, when the dangerous murderer Marwan Barghouti is courted in prison by the famous Israeli left, even as he unrepentfully still calls for a third intifada against the people of Israel. Can one imagine some of these acclaimed leftists sitting with the same forbearance with their fellow Israelis, leaders of the settlement movement, or Rabbi Waldman, or others like them? Yet they will sit in sympathy and understanding with those who still plot the destruction of their own people!

After all he had sacrificially done for his people, Jabotinsky died – unwanted by many Jews – as a pauper in New York. Many of Israel’s prophets were spurned and rejected by their own.

When will this betrayal, and running to the Gentiles for their sick approval, end? When will we, as the people of God, believe in Him enough to not run in the shadows of the Gentiles, as Isaiah of old prophesied:

“Woe to the rebellious children,” says the Lord, “who take counsel, but not of Me, and who devise plans, but not of My Spirit, that they may add sin to sin; who walk to go down to Egypt, and have not asked My advice, to strengthen themselves in the strength of Pharaoh, and to trust in the shadow of Egypt! Therefore the strength of Pharaoh shall be your shame, and trust in the shadow of Egypt shall be your humiliation. For his princes were at Zoan, and his ambassadors came to Hanes. They were all ashamed of a people who could not benefit them, or be help or benefit, but a shame and also a reproach.” (Isaiah 30:1-5)

I would like to end with the words of that great and dedicated Zionist warrior, ‘Yoni’ Netanyahu, brother of today’s Prime Minister of Israel, who, in one of his last letters to his wonderful parents, wrote these lines:

“When the Jews don’t have trouble to unite them, they immediately start fighting each other. I grow pessimistic about our ability to hold out – and to improve the State in the long term with a population like this. If we’re not destroyed from without (a hypothetical assumption, of course, as I’m 100 percent certain it won’t happen), we’ll be destroyed from within.

One of the few bodies in the country that does function efficiently, and to a large extent is free from the evils of bureaucracy, and in which things are judged by results (and not merely by the professed intentions), is, of course, Zahal (the Israel Defense Forces). True, this is an army of all the people, but the trouble is that our people look on it as a baby to admire and boast about, and not as a body that can serve as a model for their own behavior. I may be wrong, but it seems to me that at the moment the best thing I can do to help the situation is to be in the army, and thereby contribute toward the security of us all.” (Self-portrait of a hero)

May the wisdom of his words prevail!