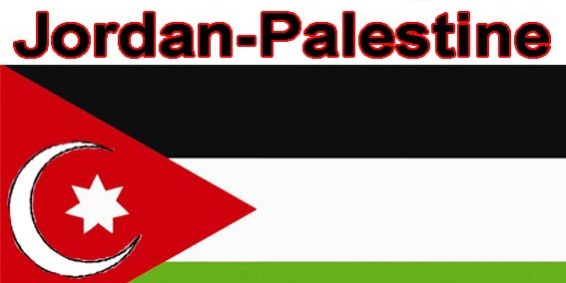 Listen, Palestinian Arabs, If you want to march, march on Jordan.

The “Jordan-is-Palestine” option for resolving the Arab-Israeli conflict is an idea that, despite history and logic, was beaten into silence by Israel’s enemies and detractors.  Critics denounced the concept as preposterous, reactionary and counterproductive.

And yet, the idea has been resurrected from within Jordan itself.  There can be no dispute that Jordan was created in a sovereign vacuum on land that had comprised most of the Palestine Mandate.  However, its creation as Transjordan in 1921 satisfied a geopolitical need unencumbered by a Palestinian national myth that had not yet been invented.

In contrast, the Oslo peace process was based on the false premise that an ancestral population was indiscriminately displaced by Israel’s establishment and now must be repatriated at her expense.  Because Jordan embodies the concept of Arab self-determination as contemplated by the San Remo Conference and the Palestine Mandate, and because most Jordanians already identify as Palestinian, it is high time to recognize it as the Palestinian homeland and scrap the current peace process.

The Oslo Process was heavily weighted against Israel from the start because it demanded validation of the Palestinian narrative and, thereby, the delegitimization of Jewish historical claims.  After cajoling the country into accepting the farce of Oslo, the Israeli left made it politically incorrect to assert traditional Jewish claims or to mention that the Palestinians have no ancestral connection to the Land of Israel.  The peace process was focused on resolving the plight of Arab refugees and perpetuating the artifice that they originated in ancient Israel while the Jews were merely colonial interlopers.

The truth – that Jews have the longest history of continuous habitation, that they preceded the Arab-Muslim conquest by thousands of years, and that the Palestinians are largely descended from an immigrant population that grew during the late Ottoman and British Mandatory periods – was suppressed under layers of Freudian self-denial.

One need look no further than the operational definition of “refugees” employed by the United Nations Relief and Works Agency (“UNRWA”) to see past the façade of Palestinian nationality.  Unlike relief organizations that seek to ameliorate the condition of wartime refugees through resettlement, UNRWA’s sole purpose is to maintain the statelessness of Arabs who became refugees in 1948, regardless of whether they now live in Judea, Samaria, Gaza, Jordan, Lebanon or Syria (and irrespective of whether their forebears came from Egypt, Algeria or elsewhere), and thereby to reinforce their stature as a people though they possess none of the ethnic, cultural or institutional hallmarks of nationality.

According to UNRWA, Palestinian “refugees” are those Arabs who established residency within the Mandate between June 1946 and May 1948, who lost their homes and means of livelihood during Israel’s War of Independence, and who now reside in areas where UNRWA services are available.  To put this in perspective, no similar agency was created to serve the needs of the nearly 800,000 Jewish refugees who were summarily expelled from Arab-Muslim lands and dispossessed of whatever assets they owned in 1948, and who subsequently were taken in by Israel.

The improbable definition employed by UNRWA begs the question of how Palestinians could be designated as refugees based on a minimum residency requirement of only two years if they are truly descended from people who continuously inhabited the land for hundreds of generations.

These “refugees” clearly were not required to be native born or descended from indigenous ancestors, and in fact many were either immigrants themselves or the progeny of immigrants.  Moreover, they were not expelled from an existing country with recognized borders that was innately “Palestinian” or that ever exhibited the trappings of sovereignty or national character.  Indeed, no sovereign nation existed between the Jordan River and the Mediterranean Sea from the time the Romans conquered the Kingdom of Judea until Israeli independence in 1948.  There was, however, a continuous Jewish presence in the Land of Israel, including Judea, Samaria and Gaza, dating back to antiquity, and a Jewish majority in Jerusalem for generations.

Given that the proponents of Oslo sought to suppress this history and ignore away the authenticity of traditional Jewish claims, the peace process from its inception was on a collision course with Israeli autonomy and national integrity.  Moreover, the basic premise of Oslo, i.e., that the Jewish homeland should be further divided after much of its territory had already been taken to create an autonomous Arab state in Jordan, was repudiated by the Arabs when they rejected the U.N. Partition Plan in 1947 and launched a genocidal war against Israel and her people.

The peace process was doomed to failure because it demanded that Israel relinquish historically Jewish land, but did not insist with equal vigor that the Arabs recognize Israel’s right to exist as a Jewish nation or take meaningful steps to eliminate antisemitic incitement.  The conceit of Oslo was that it validated apocryphal Palestinian pretensions even as it denigrated verifiable Jewish claims and treated Israel as a colonial aberration.

The architects of Oslo paid lip service to the need for mutual recognition, but they never chastised the Palestinian Authority for failing to amend its charter calling for Israel’s destruction (which it had agreed to do as a precondition under the Oslo Accords), for continuing to engage in terrorism and antisemitic incitement, or for stating repeatedly that it would never recognize a Jewish State.  Although American and European meddlers insisted that Israel consider hot-button issues like the Arab “right of return,” it became increasingly clear as the process wore on that matters of existential concern to Israel could not really be negotiated, and that she was expected simply to capitulate to all Palestinian demands – no matter how expansive or outrageous.

The improbable definition employed by UNRWA begs the question of how Palestinians could be designated as refugees based on a minimum residency requirement of only two years if they are truly descended from people who continuously inhabited the land for hundreds of generations.

It was assumed, for example, that Israel would give up Judea, Samaria and East Jerusalem without question, although these were historically Jewish lands and though Jerusalem was never the capital of any Arab or Muslim nation, and certainly not one called “Palestine.”  Most galling was the continual promotion of the Palestinian Authority as moderate despite its oft-stated goal of the phased destruction of Israel, the starting point of which was to be the much ballyhooed two-state solution.

The inconvenient truth is that most Palestinians in Judea, Samaria and Gaza do not want two states living side by side, but rather a single state built on the ruins of Israel.

At its very core, Oslo constituted a rejection of established international precedent recognizing the Jews’ aboriginal connection to the Land of Israel.  It ignored, for example, the import of the San Remo Conference of 1920 and the League of Nations Mandate for Palestine of 1922, which recognized the right of close settlement and of the Jews to live anywhere in their homeland.  The goal was unrestricted Jewish habitation west of the Jordan River.  There was no discussion of a Palestinian homeland because there were no Palestinians at the time.  Rather, Arab self-determination was addressed by the establishment of the French Mandate in Lebanon and Syria and the British Mandate in Mesopotamia (Iraq) and Transjordan.  In contrast, the San Remo Resolution and Palestine Mandate recognized “the historical connection of the Jewish people with Palestine and … the grounds for reconstituting their national home in that country.”  Unfortunately, historical reality never fit the Oslo scheme.

The San Remo Resolution applied to lands designated for inclusion in Mandatory Palestine on both banks of the Jordan River.  Nevertheless, before the Mandate was signed in 1922, the British gave Transjordan to the Hashemites after they were forced out of the Arabian Peninsula by the Saudi royal family.  Indeed, the Hashemites were the ancestral rulers of Mecca, said to be descended from the tribe of Mohammed, and had no connection to that portion of the former Ottoman Empire that would become Jordan.  But they were installed nonetheless as a foreign ruling class over a population that was composed largely of immigrants from other parts of the Arab-Muslim world who were complete strangers to Hashemite sovereignty.

Jordan today is governed by a Hashemite minority that engages in apartheid-like discrimination against the Palestinian majority.  Though Palestinians are accorded nominal citizenship, they are effectively disenfranchised through electoral gerrymandering and are in many ways treated as aliens whose residency is only temporary.  In addition, thousands have been stripped of their citizenship in order to perpetuate the fiction that they are stateless vagabonds whose rightful place is a country that never existed.

The Hashemites enforce the Palestinians’ separateness in this way to make them yearn for the liberation of “Palestinian Arab lands” from “the Zionists.”  Nevertheless, there is growing recognition among them that they will never “return” to “Palestine”; and accordingly many now desire full citizenship and equal rights in Jordan.

There is also an increasing sense that whatever the Palestinian leadership’s ultimate strategy may be in Judea, Samaria and Gaza, it is not for the benefit those living in Jordan and elsewhere, even though they constitute the bulk of the Palestinian population.

There are roughly five million Arabs now living in Jordan, Lebanon, and Syria and elsewhere who identify as Palestinian, compared to only 1.5 million in Judea, Samaria and Jerusalem.  Giving heed to this arithmetic reality, a growing number of Palestinians recognize that Israel will not accept an Arab “right of return” that would destroy her as a Jewish state, and instead believe their homeland should be established in Jordan.

Proponents of this idea include Mudar Zahran, a Palestinian-Jordanian expatriate writer who now lives in the UK.

Zahran has written extensively about the Palestinians and their place in the Mideast, and about how their present leadership – whether the PA in Judea and Samaria or Hamas in Gaza – has no interest in mitigating the conditions of Palestinians living elsewhere.  He understands that this leadership will not accept a two-state solution or permanent peace with a Jewish nation.  He also acknowledges certain demographic and historical factors militating in favor of a homeland in Jordan, including that it already has a predominantly Palestinian population and comprises most of the territory originally included in the Palestine Mandate.

The rest of the world should do the same.