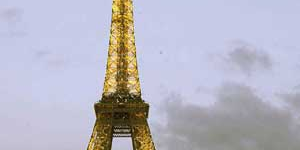 They all preach “le devoir de mémoire”, the duty to remember.

They all make anti-anti-Semitism the all-embracing popular opinion, much as anti-racism in the United States.

They all despise “the monster”, Mohammed Merah, who allegedly killed Rav Sandler and three Jewish children in Toulouse.

But France’s anti-Jewish soul played a substantial role in the creation of this hateful monster which turned off the life of four Israelis. Those familiar with Paris’ hostile attitude to Israel and the Jewish people in times of crisis are not surprised at what happened in Toulouse.

The Muslim killer didn’t come from nowhere, but from the dark continent, which is not Africa, but Europe.

Darkness suggests illiteracy, disease and poverty. None of these conditions exists in Europe.

Visitors to Paris see armed police and security squads on guard everywhere, restaurants crowded of tourists, arts and letters funded by the government.

Darkness in Europe relates to the soul, to unwarranted pride, horrible arrogance and a deep anti-Jewish fury.   Europe cannot destroy the Jews, but it simply won’t reconcile itself to Jewish existence.   French officials, who now mourn Toulouse’s Jews, have a big responsibility because they always denied that anti-Jewish contempt was growing in the local Muslim communities.

In 2010, Jacques Attali, French economist, prolific writer, high-ranking civil official and adviser to president Francois Mitterrand, dared to declare to eager-to-believe Haaretz, that anti-Semitism in France was a “nonexistent problem”.

It was just seven decades ago that France’s collaborationist Vichy regime, headed by Marshal Petain, enthusiastically took part in rounding up French Jews and turning them over to the gas chambers. Some 110,000 French Jews were murdered, a number that would have been far lower had it not been for the shameful manner in which the French cooperated with Hitler’s “Final Solution”.

Now France is salving its Holocaust conscience by making the Jews “the aggressors” and the Palestinians “the victims”.

However, Pierre-André Taguieff’s book, “La Nouvelle Judéophobie”, helped people understand that French anti-Zionism is the old anti-Semitism in an age of taboos.

In the midst of the Intifada, when Israelis were butchered en masse, Paris’ ambassador to London, Daniel Bernard, called Israel “that shitty little country Israel”.   In the 1967 Six-Day War, when Israel’s life was threatened, President Charles de Gaulle took a pro-Arab policy and instituted a weapons embargo. He characterized the Jewish people “an elitist and domineering people”. For the first time since World War II, a head of state had directed an anti-Semitic remark at the Jewish people.

The French equipped Saddam Hussein with his most advanced missiles (only the Soviets have sold Iraq more weapons). In return for billions of dollars, Paris sold a nuclear reactor to Baghdad, ignoring the fact that Saddam wanted an atomic bomb and why (only Israel’s bombing of Osirak removed this danger from the world).

On Friday October 3, 1980, the eve of Succot, a motorbike bomb exploded outside the Copernic Synagogue, the liberal synagogue of the Paris elite. Four people lay dead on the street and in the synagogue interior. The bombing fell on the 39th anniversary of the “Jewish Decrees” of the Vichy regime. The bomber has now been identified as, allegedly, Hassan Diab, a professor of Palestinian origin, reportedly then a PFLP splinter-group operative, who is currently residing in Ottawa, Canada.

French Foreign Minister Jean Sauvagnargues was the first Western official who met Yasser Arafat in Beirut, in 1974. A year later the PLO opened its first European office in Paris, with a charter calling for “the elimination of Israel”.

In 1977 President Valery Giscard d’Estaing granted asylum to Ayatollah Khomeini, who went on to become the founder of a genocidal Islamic empire.   Paris has been the main promoter of the 1980 Venice Declaration in which the PLO was recognized by the European Union.

The French continued to support Arafat even after he commenced his terrorist offensive against Israel, in September 2000, when Jewish schools and synagogues were firebombed also in France.

At the United Nations, France has always been active in building Europe’s anti-Israel voting record.

Jules Renard, a republican, leftist, and Dreyfusard, once said about the French: “We are all anti-Semites, some of us have the gallantry or coyness not to flaunt it”.

The writer, an Italian journalist with Il Foglio, writes a weekly column for Arutz Sheva. He is the author of the book “A New Shoah”, that researched the personal stories of Israel’s terror victims, published by Encounter. His writing has appeared in publications, such as the Wall Street Journal, Frontpage and Commentary.