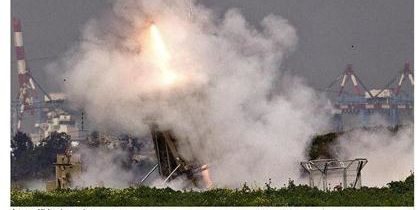 The silence in the mainstream media was deafening. Silence about what?

Well simply put. The Palestinians launched a massive missile barrage against southern Israeli cities, towns and villages. These communities endured for several days a barrage from the Gaza Strip of well over 200 lethal missiles aimed deliberately by Palestinian terrorists at Israeli civilian targets. Israel had earlier been forced to eliminate a leading Palestinian terrorist in Gaza – a monster who was in the final deadly stages of planning to repeat the grisly murder of eight Israeli civilians he had perpetrated a year earlier near Eilat in southern Israel.

The planned terror atrocity could not be allowed to occur again, perhaps this time with even greater Israeli civilian casualties. But the enormous missile barrage was the Palestinian Arab response to the removal of this new terror threat.

Over a million Israelis were forced to live in bomb shelters, schools were closed, and the population lived in fear with only 15 seconds warning of incoming rockets. Yet the U.N. and the international media was silent except when a report by Arab “reporters” inside Gaza claimed a Palestinian child was killed — then it became headline news and the morally corrupt U.N. bestired itself.

But the same international media is manipulated and fooled time and again by falsified reports and tweets used effectively by the Hamas, Fatah and Islamic Jihad propaganda machine. For example, consider the following: According to Honest Reporting, two tweets with pictures began circulating that were subsequently proven to be completely false and based upon vicious lies.

The first picture, tweeted by Khulood Badawi and later by Diana Alzeer, depicted a Gaza girl who was allegedly killed by an Israeli air strike on the night of March 10th, 2012. The picture was, however, proven to have originated in 2006 and to have had nothing at all to do with current Israeli responses to Palestinian terror.

While the photo was proven to be completely false, it nonetheless become the top tweet with over 300 retweets. It was then refuted by Avi Mayer who found that the photo dated back to earlier than 2008.

But the Reuters photo, which was taken on August 9, 2006, was originally released with an incorrect caption, and then reluctantly corrected a day later after complaints were filed:

The correction read: “A Palestinian man carries the body of three year-old Raja Abu Shaban, in Gaza August 9, 2006. The three-year-old girl who had been reported killed by an Israeli air strike in Gaza on Wednesday actually died of an accident, Palestinian medical workers said on Thursday. Workers at Gaza’s Shifa hospital said on August 10, 2006 that the initial mistake over the cause of death appeared to have arisen because the girl’s corpse was brought in at the same time as the bodies of the gunmen.” REUTERS/Mohammed Salam.

The tweets, however, have already been circulated around the web, despite having been proven to be false.

A second photo tweeted by Maissam Nablussi, allegedly showing an aerial strike in Gaza that day, was also proven to be completely unrelated to the current round of Palestinian aggression and dated back to 2009, the IDF explained.

On March 11, Nablussi uploaded a photo to Facebook, claiming it depicted “Gaza under attack today.”

The photo was exposed as having first appeared on various websites, including that of Reuters, in 2009 following Operation Cast Lead, according to the IDF. Reuters was previously condemned in 2006 when another incident of blatant manipulation of the news by the fraudulent use of photo shop was exposed.

The national and international media is routinely taken in by similar fraudulent photos that, upon investigation, were taken several years earlier and had no connection whatsoever with the present day. Tragically, the media often appears uninterested in employing the most basic methods to confirm or deny the truth or accuracy in what they report or display.

Terrible damage is done to the embattled Jewish nation from such false photos and from the ignorance of millions of people who believe everything they read and see. Then there is this outrageous report by the Times, falsely claiming Israeli ground to ground missiles strike at Gaza:

The caption circled under the picture is totally untrue. Israel’s Iron Dome anti-missile defense intercepted Palestinian rockets approaching Israeli population centers like Ashdod, Ashkelon, Beer Sheva, etc. Israel did not launch a barrage of missiles towards Gaza. The reason being that such weapons would hit civilians and not allow for pin-point targeting of Palestinian terrorists by the IDF. Such pin-point targeting is always done to specifically avoid civilian casualties as much as possible. Shame on The Times.

So Israel is damned whatever it does to defend itself. Its moral code of honor and military terms of engagement preclude it from attacking civilian areas and targets even though the Palestinian terrorists deliberately place their missile launchers in and near hospitals and schools from where they operate hoping that Israeli responses to their terror attacks will kill women and children and make for anti-Israel propaganda.

It is customary for Palestinian missile squads to hold children as hostages while they fire missiles. And Israeli soldiers are often confronted with Palestinian terrorists holding women and children as human shields. In such instances the Israeli troops are forced to allow the terrorists to escape rather than harm the civilians.

But such thuggery is even accepted and condoned by the Arab population itself as they are routinely held hostage by the same terrorists. But when Israeli civilians, especially children, are murdered by the Hamas, Fatah and Islamic jihad thugs and suicide bombers, the Arabs celebrate by passing out candies to each other. In short, the Arabs who call themselves Palestinians are a terminally sick society with whom any true peace has become an impossibility.

At the time of this writing, yet more missiles are striking Israeli civilians as the Palestinians predictably break each ceasefire at the behest of their Iranian masters who want low intensity violence to be enforced. If it was not because of the wonderfully effective Israeli anti-missile defense system known as Iron Dome, which has so far successfully intercepted some 90% of Palestinian missiles, the Israeli casualties would be horrific.

And all the while, the Iranian mullahs and their evil clown president, Mahmoud Ahmadinejad, are pulling the strings in Gaza, relentlessly aiding and abetting the Palestinian aggressors while proceeding non-stop in the production of nuclear weapons, which they have promised time and again will be used against Israel.

And while Iranian supplied missiles scream in from Gaza, fired by evil men in the hope of killing and maiming Israelis, the Iranian regime describes its genocidal intention towards the tiny Jewish state by gleefully and gloatingly repeating its perverse mantra: Just one bomb!

A Hard Left Turn Against Israel in the U.S. Congress
June 3, 2022
Doctrine, not despair: This breeds Palestinian terrorism
April 8, 2022
‘Salt of the earth’: Bereaved relatives mourn 19-year-old victims of Hadera shooting
March 30, 2022
Horror and Heroism at Homesh
January 14, 2022
Sorry, Everyone, Hamas is Still a Terrorist Group
December 6, 2021
Red Alert: Part 1, Interview with Dara Horn. What do we have to gain from perspective?
November 24, 2021