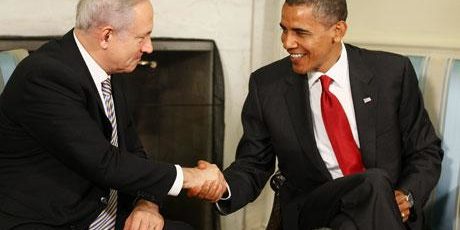 The ideological divide between Prime Minister Benjamin Netanyahu and U.S. President Barack Obama is unbridgeable. It cannot be papered-over by photo-opportunities, smiles and warm hospitality.

On the other hand, the worldview expressed by Netanyahu during his recent visit to the U.S. is consistent with the majority of Americans and their representatives in the U.S. House of Representatives and U.S. Senate.

According to a February 12, 2012 Pew Research Center poll, Americans support employing military force to prevent Iran from getting nukes by a margin of 58 percent to 30%. Twelve percent are undecided. Thirty-nine percent to 5% want the U.S. to support a potential Israeli military preemption to prevent Iran from becoming nuclear, while 51% want the U.S. to remain neutral. These opinions have been consistent since October, 2009. A majority of Americans – 64% to 21% – maintain that tougher sanctions will not be effective in preventing Iran’s nuclear drive. Most Democrats, Independents and Republicans concur that even tougher sanctions are ineffective.   A

March 3, 2011 NBC/Wall Street Journal poll – conducted by Democrat Peter Hart and Republican Bill McInturff – documents that a 52% to 40% majority of Americans support military action to destroy Iran’s capability to develop nuclear weapons. According to a February 2, 2012 Pulse Opinion Research poll, conducted for “The (Capitol) Hill” newspaper, likely voters support the use of military force – 49% to 31% – to prevent Iran from obtaining a nuclear weapon. A January 19, 2012 Rasmussen Report shows that 63% of likely voters believe that sanctions are unlikely to stop Iran’s nuclear weapons development.   The aforementioned polls reaffirm that the U.S. is a center-right nation, consistent with polls which document that conservatives (40%) and moderates (40%) outnumber liberals (20%).

Apparently, Netanyahu was not able to convince Obama that:   • Imposing sanctions – which have been undermined by Russian, Chinese, Japanese, Indian and Turkish non compliance – will not prevent Iran from becoming a nuclear power. Forty years of sanctions did not prevent the nuclearization of North Korea, and 33 years of sanctions against Iran have provided Tehran with additional time to develop/acquire nuclear capabilities.

• The U.S. is the prime target for Iran’s nuclear weapons, as it is for al-Qaida terrorism. Iran is developing its super-capability (nuclear weapons) in order attain its super-goal (domination of the Gulf), and remove the super-obstacle (U.S. military presence) from the region. Israel is a secondary target for Iran.

• Vital U.S. interests are at stake. A nuclear Iran would accelerate nuclear proliferation among anti-U.S. regimes in the Middle East and beyond, would cause a meltdown of pro-U.S. regimes in the Gulf, would disrupt the supply of oil with devastating implications for the price at the pump and on unemployment, could transfer nuclear systems to its beachheads in Venezuela, Bolivia, Ecuador and Mexico, and would bolster global Islamic terrorism and sleeper cells in the U.S. and Canada.

• The cost of non-preemption (a nuclear confrontation) would dwarf the cost of preemption.

The Netanyahu-Obama summit highlighted the clash of their respective ideologies, which was the background for Netanyahu’s speech at the AIPAC conference.   While Obama adheres to long-term engagement with rogue regimes – through diplomacy and sanctions – Netanyahu believes that long-term engagement is perceived by rogue regimes as hesitation and vacillation, thus fueling radicalism, violence and instability.

While Obama prefers a domestically-driven regime change in Iran over a military preemption, Netanyahu has concluded that a prerequisite for regime-change is a surgical non-occupation, no-boots-on-the-ground military preemption, which would provide the required tailwind for the domestic opposition.   While Obama refers to recent developments on the Arab street as the Arab Spring, which could, supposedly, moderate the Middle East and could bring down the Ayatollahs’ regime, Netanyahu observes a tectonic, stormy Arab Winter, which will add fuel to the burning Middle East.

While Obama highlights multilateralism, and considers the U.N. as a preferred quarterback of international relations, Netanyahu is aware that the U.N. is a hostile arena for the Free World. He is convinced that U.S. unilateralism is essential to global sanity, based on U.S. moral and strategic exceptionalism.   While Obama dismisses the notion of transnational Islamic and Jihadist terrorism, Netanyahu recognizes the global nature of Islamic terrorism, with Iran as one of its quarterbacks.   While Obama considers the Palestinian issue to be the root cause of Middle East turbulence, the crown jewel of Arab policy-making and the crux of the Arab-Israeli conflict, Netanyahu is aware that the Palestinian issue is a derivative of the Arab-Israeli conflict, and a secondary/tertiary factor in shaping the Middle East.   In order to prevent Iran from gaining nuclear capabilities, Obama will have to amend his worldview.

Otherwise, Netanyahu will have to demonstrate the principle and value-driven tenacity and steadfastness of former Israeli Prime Ministers David Ben-Gurion, Levi Eshkol, Golda Meir, Menachem Begin and Yitzhak Shamir, who founded the Jewish state, and catapulted it to dramatic achievements, through the defiance of U.S. and global political correctness.