This Bethlehem conference is no Purimshpiel 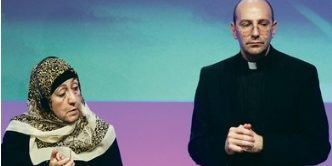 As Julius Streicher was led to the gallows, he understood the irony in 10 major Nazi criminals being hanged in the space of 103 minutes. “Purim-fest 1946!” he exclaimed, referring to the hanging of Haman’s 10 sons after their father’s attempted genocide of the Jewish people was thwarted by Mordechai and Queen Esther in ancient Persia. This year on March 3, Bethlehem will play host to a gathering whose purpose also resonates with the Purim story. This time, the object is ostensibly not the annihilation of Jews, but rather of the Jewish state.

The Christ at the Checkpoint Conference (CATC) differs from other church Middle East “peace initiatives” like Israel Apartheid Weeks or BDS campaigns. Those preach – mostly to the converted – that immoral Israel is the greatest threat to world peace, while hoping to energize the apathetic and ignorant. There is little indication that these hostile activities have impacted erstwhile supporters of Israel.

CATC, however, is taking dead aim at Israel’s single largest and most reliable supporter: tens of millions of evangelical Christians who have stood with the Jewish state since day one. If it achieves even some of its aims, the consequences will be disastrous for Israel and world Jewry.

CATC, which first met in 2010, attacks the two pillars of evangelical support.

Some evangelicals – but definitely not all – find theological roots to stand by Israel. Past presenters at CATC have strenuously argued that Christian Zionism is a perversion of Christian belief. With the arrival of Jesus, Jews and their descendants lost all claim to Biblical covenants – replaced by the New Jews, or Christians. To achieve their political goal, some CATC presenters resurrect Replacement Theology, which together with the charge of deicide, were key theological inspiration for Jew-hatred for two millennia.

Those evangelicals who embrace the justice of Israel’s historical claim to the Land face CATC’s shameless rewriting of history. Jews are depicted as recent usurpers while Palestinians are presented as the true descendants of the Biblical Jews! At CATC 2010, Pastor Mitri Raheb, head of the Evangelical Lutheran Christmas Church in Bethlehem, said, “Actually, Israel represents Rome of the Bible, not the people of the land. And this is not only because I’m a Palestinian. I’m sure if we were to do a DNA test David, who was a Bethlehemite, and Jesus, born in Bethlehem, and Mitri, born just across the street from where Jesus was born, I’m sure the DNA will show that there is a trace. While if you put King David, Jesus and Netanyahu , you will get nothing, because Netanyahu comes from an East European tribe who converted to Judaism in the Middle Ages.”

The campaign of Christian Palestinianism first wooed the evangelical Left and Center with activists going church by church with an emotionally charged, visually driven narrative of suffering at the hands of brutal Israeli occupiers. Now CTAC hope to win over some important conservative backers of Israel who are attending this year’s Bethlehem conference. They will be lobbied by Christians – not Muslims – to avoid the inconvenient truth of the atrocious treatment of Christians by Muslims throughout the Middle East and Africa.

Key presenters at the conference include Anglican Rev. Stephen Sizer, who keeps company with people like Sheikh Nabil Kaouk, deputy chairman of Hezbollah’s executive council. He and Holocaust denier Frederick Toben participated in the Voice of Palestine’s Nakba Conference in Jakarta, where Sizer proclaimed, “The church in Palestine was telling me something very different, and what I learned was that Palestine needed to be liberated from the Jews!” One Anglican cleric, Rev. Nick Howard has called on the Church of England to move against Sizer for online posting of anti-Semitic and Holocaust revisionist materials.

Another speaker is Gary Burge, author of Whose Land? Whose Promise? What Christians Are Not Being Told About Israel and the Palestinians, who sits on the board of directors of the Middle East Fellowship, The Holy Land Trust’s US partner. An early anti-Israel activist and biblical authority, Burge opined that “The people of Israel cannot claim to be planted as vines in the land; they cannot be rooted in the vineyard unless first they are grafted into Jesus. Branches that attempt living in the land, the vineyard, which refuse to be attached to Jesus will be cast out and burned.”

Also presenting is Porter Speakman, Jr., who produced the horridly biased and widely viewed film, With God On Our Side, that urges Christians not to assist the Israeli brutalizing of Palestinians through the support of Christian Zionism. It openly endorses replacement theology, and initially featured words concocted by Israel-hater Ilan Pappe but falsely attributed to Ben-Gurion: “The Arabs will have to go, but one needs an opportune moment to make it happen, such as war.”

And then there is long-time UK anti-Israel activist Ben White, who has declared, “I do not consider myself an anti-Semite, yet I can also understand why some are. There are, in fact, a number of reasons. One is the state of Israel, its ideology of racial supremacy and its subsequent crimes committed against the Palestinians.”

CATC’s fuels its outreach on a growing mix of toxic theology and politics – from the Kairos Palestine Document which lays all blame for Holy Land troubles on “Apartheid” Israel to the recent Bethlehem Call that Christians should not be balanced and fair, but committed only to the Palestinian cause. As for a two-state solution? Those Bethlehem conference organizers who still speak of two states have refused to acknowledge that one of them is Jewish.

Haman would be pleased.

The writers, both rabbis, are respectively the associate dean and director of Interfaith Affairs at the Simon Wiesenthal Center.