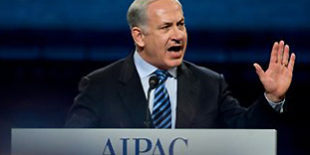 Prime Minister Binyamin Netanyahu is scheduled to leave for Canada and the US late Thursday night for a visit that – unlike previous trips to Washington and meetings with US President Barack Obama that focused on the Palestinians – is expected this time to center on Iran.

Government sources said Netanyahu is spending considerable time working on his speech to the annual AIPAC policy conference Monday evening.  The sources said this speech will not just be one of platitudes, but rather a “policy speech” that will “break new ground.”

Netanyahu and his top advisors have been working on the speech for a number of days. Outside of the brief statements he and Obama are expected to give to the press after their meeting Monday morning – a statement the two sides are working on — the AIPAC speech that evening will be Netanyahu’s only public comments in Washington.

Netanyahu is expected to address both Iran’s nuclear march, and the stymied diplomatic process with the Palestinians.

Last year Netanyahu’s speech to AIPAC was short on policy, because the next day he spoke at a special joint session of Congress and wanted to save policy pronouncements for that speech.

Netanyahu is scheduled to land in Ottawa early Friday morning and hold a meeting with Canadian Prime Minister Stephen Harper, who has turned Canada into one of Israel’s staunchest supporters and closest friends in the world.

This will be Netanyahu’s second visit to Ottawa since taking office. The last visit was in May 2010, but was cut short by the Mavi Marmara incident.

Netanyahu is not scheduled to leave for Washington from Ottawa until Sunday afternoon, listening to Obama’s speech to AIPAC Sunday morning before travelling to the US.  President Shimon Peres is scheduled to address the parley just before Obama.

According to a report in The Wall Street Journal, Obama is considering using his AIPAC speech to more clearly define US policy on military action against Iran before his meeting with Netanyahu the next day.  The report said Obama’s staff was considering the possibility of outlining the “red lines” that Washington believes Iran should not be allowed to cross.  Other administration officials, however, believe that if Obama does want to set out those red lines publicly, he was likely to do so in private with the prime minister.

Netanyahu is scheduled to leave Washington Tuesday afternoon, in order to make it back to Israel Wednesday before the start of Purim that evening.

This will be Netanyahu’s first visit to the US without his trusted chief-of-staff Natan Eshel, forced out of office last week for misconduct toward a female subordinate.

Netanyahu’s communications director over the last six months, Yoaz Hendel, will also not be joining the trip, since he resigned last week as a result of the Eshel affair. He will be replaced on the visit by Lior Dan, whom Netanyahu picked to replace Hendel. Dan served as one of Netanyahu’s spokesmen over the last six months, and has traveled with the prime minister in the past.