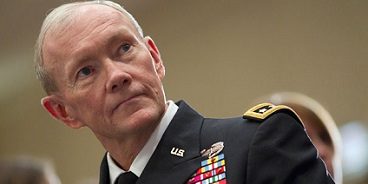 Chairman of the US Joint Chiefs of Staff Army General Martin Dempsey told a Senate panel on Tuesday he did not counsel Israel against attacking Iran over its nuclear program. “We’ve had a conversation with them about time, the issue of time,” he said. Dempsey was referring to his most recent visit to Israel a month ago.

Speaking at a Senate Budget Committee meeting, the US general also defended his comment that Iran was a rational actor. “We can’t afford to underestimate our potential adversaries by writing them off as irrational,” Dempsey said.

Earlier this month, Dempsey said in a CNN interview that an Israeli strike on Iranian nuclear facilities would be imprudent, destabilizing and would not achieve Israel’s long term objectives.

Asked whether a military strike by the US was off the table, Dempsey responded, “Absolutely not.” He stressed the danger of nuclear weapons reaching terrorist groups and the beginning of a nuclear arms race in the Middle East involving countries threatened by Iran.

Clinton satisfied with sanctions Meanwhile, US Secretary of State Hillary Clinton said that sanctions on Iran were tightening faster that the administration had expected.

She said that Asian and European nations were implementing sanctions faster than the US had thought adding the administration is working intensively to implement tough sanctions.

“We’ve seen a lot of action, a broad range of countries are making decisions to reduce their dependence on Iranian crude, unwind their dealings with the Central Bank of Iran,” she said.

“We are implementing the new Iran sanctions aggressively,” Clinton told a Senate panel, outlining steps aimed at hobbling Iran’s ability to make an atomic bomb by squeezing revenues from its oil exports.

Clinton repeated that US intelligence assessments held that Iran had not yet decided to pursue a nuclear weapon. But she said it was important to work with other countries to keep up the pressure.

“I think that there’s a very clear-eyed view of Iran and Iranian objectives and that’s why the president’s policy is so clear and adamant that the United States intends to prevent Iran from obtaining a nuclear weapon,” she said.