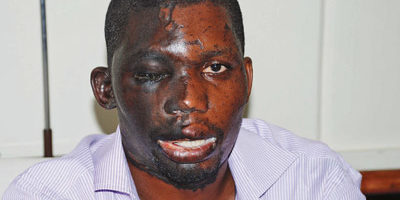 Today — Ash Wednesday — I spent a couple of hours at an Israeli hospital with a man who does not need to put ashes on his forehead to commemorate Lent: Half of his face was burned off by an attack with acid a couple of months ago. He is a Ugandan pastor, a convert to Christianity from Islam, and his outspoken Christian witness has not been well received by Muslim radicals.

His name is Umar Mulinde. He grew up in a staunch Muslim home in Uganda; his grandfather was an imam, and Umar was trained in Islamic thought from childhood. His Muslim beliefs went unchallenged until he went to university, where he met a scholar who examined the beliefs of the New Testament in light of the Koran. Something in the professor’s words caused Umar to reconsider his faith. Although he was nearly convinced by the professor’s arguments, he was well aware that leaving Islam for Christianity would be the end of life as he knew it. He would be shunned by his family and friends, and viewed as an apostate by the Islamic community.

He decided to keep his thoughts to himself.

But one night Umar Mulinde had a profoundly vivid dream. He was bound in chains and surrounded by flames. He struggled, but was unable to free himself. He awoke, soaked in sweat and terrified. He spoke aloud an Islamic prayer that was meant to rebuke the evil jinn that had sent the dream. Temporarily relieved, he went back to sleep, and had the same dream again. He repeated the prayer. His fear abated, but the dream yet again recurred. Three times he wrestled against the chains and failed to break them.

Deeply troubled, Umar went to a Muslim teacher for advice. He was given further information, but by that time he knew what he had to do. One Sunday, for the first time in his life, he walked into a Christian church. He listened closely to the sermon, and when the pastor asked if anyone wanted to follow Jesus, Umar Mulinde put up his hand. He walked to the front of the church and offered a confessional prayer. He had publically converted from Islam to Christianity. He has never looked back, although he’s had ample reason to do so.

As he walked out of the church, three of his Muslim friends attacked him. “I knew that I would suffer beatings if I became a Christian, but I thought it would happen for a while and then stop. I was wrong.”

Meanwhile, as he studied the Bible — both Old and New Testaments — he continued to come across the phrase “the God of Israel.” He had heard nothing but hateful words about Jews. He didn’t even know where Israel was, but only that its people were “evil.” Now, he realized, “the God of Israel” was his God too.

As time passed, Umar Mulinde began to preach the Christian gospel, and before long he had a church of his own. At the same time, his curiosity about Israel had continued to grow. He traveled there to see for himself, taking along some other pastors. More and more captivated, he repeated the journey year after year.

At the same time, he was beginning to speak out about the Islamization that was taking place in Uganda. “More than 80 percent of the population is Christian, and 13 percent is Muslim, yet sharia law is recognized by the constitution although it is not operational,” he told me. Mulinde also organized a demonstration against Iranian president Mahmoud Ahmadinejad when he visited Uganda in 2010 — hundreds of participants wore “I love Israel” shirts and caps.

This past Christmas night, as Umar Mulinde walked out of his church, someone’s movements caught his attention; he sensed danger and immediately turned away. When the acid was thrown at him, it reached only half of his face — the right side, including his eye — and part of his back. Mulinde clearly heard his assailant declare “Allehu Akbar” three times as he slipped away into the crowd.

Mulinde was hospitalized in Uganda, but the medical staff soon acknowledged that he needed more help than they could offer. He contacted a friend in Israel. At the expense of concerned Israelis, he was flown to Tel Hashomer hospital, which has one of the most sophisticated burn centers in the world. Israelis, unfortunately, have had much experience with such injuries.

Umar Mulinde’s face is dramatically scarred and he has lost the sight in one eye. But his spirit is not dampened. He pastors a church of 1,000, and once mended, he intends to return to his home, and his wife and family.

As I left, he cautioned me about America. “Leaders in your country are not telling the truth about Islam,” he warned. “It is not a religion of peace. It is a religion of fear, not love. . . . Thank God I am free today from the chains that once bound me.”

— Lela Gilbert, a Jerusalem-based writer, is an adjunct fellow at the Hudson Institute, and the author of the forthcoming book Saturday People, Sunday People: Israel through the Eyes of a Christian Visitor.