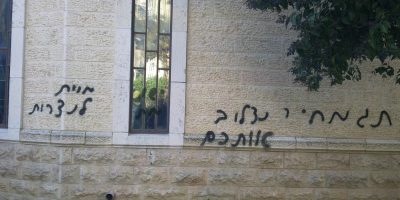 Local Christian leaders and an Israeli government representative gathered at the “Baptist House” church in central Jerusalem on Tuesday, one day after the building was vandalized with anti-Christian graffiti.

The meeting could be best described as a demonstration of solidarity by the State of Israel with the Christian community, but it was also somewhat of a celebration of the strong friendship that exists between Israel and Christians, as well as a call for Christians to respond to such attack with even more love for Israel.

Chuck Kopp, pastor of the local Baptist congregation, started the event by suggesting that while the attack was unfortunate and hurtful, the response by Israelis has had a far bigger impact.

“The rabbi and cantor from the synagogue across the street came the same day with a huge bouquet of flowers and a note of solidarity and friendship,” said Kopp. “Another Israeli lady came in with flowers and when I asked if she was also a neighbor, she said no, she was just a concerned Israeli citizen. There has been much outpouring of solidarity and friendship from Israelis.”

Herbby Geer, the official Southern Baptist Convention representative in Israel, added, “You have extremists everywhere, but Israel has consistently stood with its minorities.” Referencing the fringe “price tag” gangs that are believed to have been behind the attack, Geer said, “We know that there is a ‘price tag’ for standing for what we believe, and we know that most Israelis want us to be who we are.”

“I apologize on behalf of Israel. You have the solidarity and the support of the overwhelming majority of Israelis, who view such attacks with disgust. We will bring those responsible to justice, but more importantly you must know that the majority of Israelis reject such actions.

“Nobody deserves to be vandalized like this, but especially not our special and supportive friends.”

Messianic pastor David Ortiz, whose son Ami was severely wounded in a 2008 Purim bombing perpetrated by a Christian-hating Jewish extremist, asked to speak at the event, saying that it was “important for me to come here today when I heard that Dr. Zaken would be here because it is so important for the government to openly stand with us in solidarity when such attacks occur.”

Ortiz explained that “there are anti-Semites who hate Israel and who exploit such incidents involving local believers to turn around and attack Israel. It can be hard to defend Israel when we have attacks like this and no official government response.”

Also requesting to address the gathering was Kevork Nalbandian, an Armenian Christian lawyer from Jerusalem’s Old City, who made a clear call for Christians who profess to care for Israel to respond to such acts of extremism not with bitterness and criticism, but with more love.

“It is not always easy to not attack the Israeli side when we see things like this,” said Nalbandian, who has witnessed regular petty attacks on Christians in the Old City. “But, if we are true friends, what is the message we want to send? How should we react? If you saw the vandal who committed this particular crime, what would you say? Would you be bitter and angry? Or would you say, ‘Come, let us be friends’ and thereby demonstrate Christ’s love?”

In a remark that stands in direct contradiction to the agenda behind the upcoming “Christ at the Checkpoint” conference in Bethlehem, Nalbandian insisted that “it is not always right to fight for our ‘rights.’ Rather, as Christians who love Israel, we need to be, as the Lord sent us, lambs with a message of love and forgiveness.”