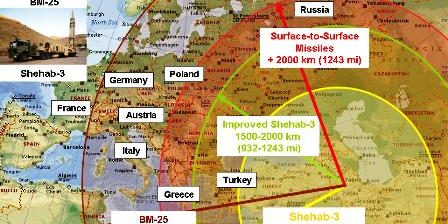 Iran is pouring money into developing intercontinental ballistic missiles that can reach the US, Israel warned Wednesday.

Finance Minister Yuval Steinitz said in an interview on the U.S.-based CNBC news network the Islamic Republic is investing “billions of dollars” in its race to develop the missiles.

Iran’s aim, he said bluntly, is “not only to be able to threaten Israel and the Middle East,” but rather to extend its military reach to Europe and the U.S.

Steinitz added that Israeli intelligence estimates that “in two to three years, they will have the first intercontinental ballistic missiles that can reach the East Coast of America.”

Last week Prime Minister Binyamin Netanyahu warned the international community that its economic sanctions have not been effective, and are doing little to slow down Iran’s nuclear development activities.

Meanwhile, Russia has repeatedly warned both Israel and the United States not to threaten Iran’s nuclear development activities, and has often protected the Islamic Republic in the international arena.

Deputy Foreign Minister Gennady Gatilov told Israel on Wednesday that any military action aimed at Iran would be “catastrophic for the region and for the whole system of international relations.”

The warning came in the wake of an announcement by the United Nations International Atomic Energy Agency that it had failed to win Iran’s cooperation in allowing the IAEA to monitor its nuclear development activities.

Israel has repeatedly warned the United States, Europe, the United Nations and others that Iran is hurtling towards its goal of becoming a nuclear threat to the entire world, and has been developing atomic weapons of mass destruction.