General Dempsey sends a message of U.S. weakness to Tehran.

Is the Obama Administration more concerned that Iran may get a nuclear weapon, or that Israel may use military force to prevent Iran from doing so? The answer is the latter, judging from comments on Sunday by Chairman of the Joints Chiefs of Staff Martin Dempsey.

Appearing on CNN, General Dempsey sent precisely the wrong message if the main U.S. strategic goal is convincing Iran to give up its nuclear ambitions. He said the U.S. is urging Israel not to attack Iran—because Iran hasn’t decided to build a bomb, because an Israeli attack probably wouldn’t set back Iran by more than a couple of years, and because it would invite retaliation and be “destabilizing” throughout the Middle East.

“That’s the question with which we all wrestle. And the reason we think that it’s not prudent at this point to decide to attack Iran,” the General said, referring to a possible Iranian response to an attack. “That’s been our counsel to our allies, the Israelis. And we also know or believe we know that the Iranian regime has not decided that they will embark on the capability—or the effort to weaponize their nuclear capability.”

In a single sound bite, General Dempsey managed to tell the Iranians they can breathe easier because Israel’s main ally is opposed to an attack on Iran, such attack isn’t likely to work in any case, and the U.S. fears Iran’s retaliation. It’s as if General Dempsey wanted to ratify Iran’s rhetoric that the regime is a fearsome global military threat. 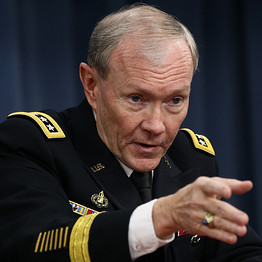 If the U.S. really wanted its diplomacy to work in lieu of force, it would say and do whatever it can to increase Iran’s fear of an attack. It would say publicly that Israel must be able to protect itself and that it has the means to do so. America’s top military officer in particular should say that if Iran escalates in response to an Israeli attack, the U.S. would have no choice but to intervene on behalf of its ally. The point of coercive diplomacy is to make an adversary understand that the costs of its bad behavior will be very, very high.

The general is not a free-lancer, so his message was almost certainly guided by the White House. His remarks only make strategic sense if President Obama’s real priority is to contain Israel first—especially before the November election.

This might also explain General Dempsey’s comments that the U.S. doesn’t believe Iran’s regime has decided to build an atomic bomb and that it is a “rational” actor, like, say, the Dutch. This would be the same rational Iran that refuses to compromise on its nuclear plans despite increasingly damaging global sanctions, and the same prudent actor that has sent agents around the world to bomb Israeli and Saudi targets, allegedly including in a Washington, D.C. restaurant.

Iran doesn’t need to explode a bomb, or even declare that it has one, to win its nuclear standoff. All it needs to do is get to the brink and make everyone believe it can build a bomb when it wants to. Then the costs of deterring Iran go up exponentially, and the regime’s leverage multiplies in the Middle East and against American interests. General Dempsey’s assurances obscure that military and political reality.

Like most of Mr. Obama’s Iran policy, General Dempsey’s comments will have the effect of making war more likely, not less. They will increase Israel’s anxiety about U.S. support, especially if Mr. Obama is re-elected and he has a freer political hand. This may drive Israel’s leadership to strike sooner. Weakness invites war, and General Dempsey has helped the Administration send a message of weakness to Israel and Iran.