US, Germany differ on Israeli ability to hit Iran 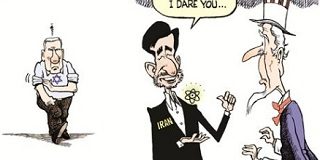 The core differences surround the number of Israeli jets and bombs required to destroy Iran’s primary nuclear facilities, as well as the challenge of refueling fighter planes to travel a distance of more than 1,000 miles into Iranian airspace and return safely to Israel.

The Times titled its rather pessimistic analysis “Iran Raid Seen as a Huge Task for Israeli Jets,” and wrote that an Israeli mission to annihilate Iran’s nuclear infrastructure would require a minimum of 100 fighter jets.

According to a sample of US defense and military analysts, it would be a Herculean challenge for Israel to penetrate Iran’s air space and launch attacks on the country’s nuclear complexes.

The Times cited Michael V. Hayden, the former director of the Central Intelligence Agency from 2006 to 2009, who explicitly declared that pulverizing Iran’s nuclear facilities is “beyond the capacity” of Israel.

Lt. Gen. David A. Deptula told the Times that, “All the pundits who talk about ‘Oh, yeah, bomb Iran,’ it ain’t going to be that easy.”

Deptula, served as the US Air Force’s top intelligence official until last year, and oversaw the air military strikes conducted in the 2001 Afghanistan War theater in 2001, and during the first Gulf war in 1991 in Iraq.

The Times offered a bleak assessment of Israel’s capability to refuel its fighter planes, saying “Israel would have to use airborne refueling planes, called tankers, but Israel is not thought to have enough.”

In a sharp contrast to the Times analysis, Hans Rühle, a leading German security expert, asserted last week in a lengthy article in the Die Welt that a comprehensive Israel-based bombing campaign could significantly set back, perhaps a decade or more, Iran’s nuclear weapons program.

Citing experts, Rühle writes that an extensive bombing campaign is within Israel’s capability to decimate Iran’s ability to continue to make progress on developing nuclear weapons.

According to Rühle, there are 25 to 30 facilities in Iran used for its atomic program, of which six are primary-bombing targets.

He cites the nuclear enrichment plant Natanz, the conversion facility in Isfahan, the heavy water reactor Arak and the weapons and munitions sites in Parchin. In addition, he notes the deep underground enrichment facility Fordow and Iran’s operational nuclear plant Bushehr.

The popular PJ Media news website columnist, David P. Goldman, wrote last week that “Hans Rühle was one of the toughest and most perspicacious analysts in those heady days” during the Cold war period.

Goldman added that “Rühle is highly confident that Israel could knock out Iran’s nuclear program for a decade or more with about 25 of its 87 F-15 fighter-bombers and a smaller number of its F-16s. Each of the F- 15s would carry two of the GBU-28 bunker busters, with the F-16s armed with smaller bombs.

Rühle writes that surveillance “information about Natanz is solid,“ adding that the “project has been observed from satellites and from the location from ‘Israeli tourists.’”

He added that Israel strongest bunker buster bombs GBU-28 could destroy the roof of the facility. If the damage is not sufficient, a second GBU-28 could be launched to complete the aim of destruction.

According to Rühle, Israel’s successful obliteration of the Syrian nuclear reactor in 2007 laid an important precedent. He writes that “many experts believe “ that strikes against Iran’s nuclear operations could set back the program 10 years, or possibly longer, based on present knowledge.

The fighter plane requirement would entail 20 F-15 machines each accompanied with two GBU-28s. He estimates that Israel’s air force has over 87 F-15 planes at its disposal. The conversion Nuclear Technology Center of Isfahan, which is largely vulnerable to attack because its buildings are not underground, could be eliminated with GBU-27 bombs. Isfahan converts the yellow cake process into uranium.

The least difficult challenge for Israel’s air force is the heavy-water reactor Arak, observes Rühle. The above-ground facility could be razed with 10 GBU-10 bombs, wrote Rühle. The strike would require 10 F- 16 fighter jets.

According to Rühe, the most difficult obstacle to destroy is the underground Fordow enrichment plant. He notes that special team forces would have to attack the facility.

The alternative would be to strike the tunnel openings with GBU-28 bombs to plug the entry points for a period of time.

The complex Parchin site remains beyond the International Atomic Energy Agency inspections and it is unclear how many bombs it would take to destroy the over 100 buildings, many of which are buried underground. Nuclear warheads are believed to be worked on in the Parchin plant.

Rühle views the nuclear power plant Bushehr as a possible primary military target, largely because the plants plutonium can be used for weapons. In contrast to the United States State Department, which views the Bushehr plant as a civilian-energy program without a military dimension, Rühle writes that “the destruction of Bushehr should not be a problem for Israel’s army – 10 GBU-28 or GBU-27 bombs would be sufficient.”

He quotes a high-level representative of the Israeli nuclear expert class who was in Berlin last year. The Israeli expert said “we cannot live with this reactor” in Bushehr because it is not immune to stopping the spread of proliferation-related material.

Rühle adds that if Israel can wipe out essential pieces of Iran’s nuclear program, then the problem is solved for a generation.

His essay is filled with a kind of supreme confidence about the ability of Israel’s military systems.

“Israel’s Air Force is first class, “ writes Rühle. “Their pilots are conditioned from the history of Israel and the constant dangers faced by the Jewish state.”

Though Rühle identifies the refueling of Israel’s fighter jets to be a thorny problem because Israel only has five tankers of the type KC-130H and four of the category B- 700, he said he believes the number to be higher.

He calls the public refuel tanker number a “rather lean supply, “ but notes that Israel’s government had requested to buy or lease from US President George W. Bush’s Administration additional refueling tanks. He adds that Israel’s Air Force has expertise over the “buddy refueling“ process among F-15 and F-16 planes. There is also the possibility of a temporary landing to refuel in Syria, Turkey, or Iraq, noted Rühle.